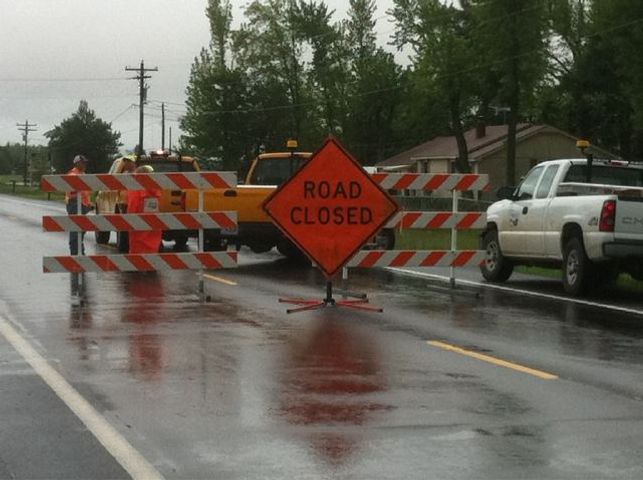 POPLAR BLUFF — National Guardsmen checked homes for residents stranded by rising flood waters Wednesday, as local authorities remained unsure about when people would be allowed back into their neighborhoods.

The flooding has forced thousands of people across the region out of their homes, and Wednesday was the eighth consecutive day of rain in Poplar Bluff. Sen. Claire McCaskill, D-Missouri, visited the Red Cross shelter in the city, where 319 evacuees slept overnight. The Black River has topped levees in dozens of places in Poplar Bluff, angering residents.

"The needs in this state alone, in terms of water projects, drainage, levees — it is a large, large price tag," McCaskill said. "We are heading into lean times for the federal government."

There were no new levee breaches Wednesday, and the Black River had crested. A nearby relief lake, Lake Wappapello, may top its boundaries by Friday, affecting people in out-county areas, a spokesman for the Army Corps of Engineers said. As of Wednesday morning, there was timeline for allowing residents back into their homes in the southern part of the city, population 17,000. Forecasters expect more rainfall in the area.

"Over the past four days, we've received more than 20 inches," said Jeff Rolland, Poplar Bluff's deputy police chief. "Another three to four inches would be just catostrophic for us."

One of the Guardsmen was Spec. Ramon Crayton. The St. Louis resident would be in chemistry class at St. Louis Community College, had Gov. Jay Nixon not activated the Guard. Instead, he was patrolling an area near East Pointe, a town south of Interstate 57.

"Most people are as concerned for their safety as we are," Crayton said. "But the ones who stayed behind are pretty confident."

There are 530 Guardsmen in southeast Missouri, a spokesman said.

Emergency crews have rescued at least 60 people across the region from rising flood waters. Hundreds of roads remain closed, with new problems arising. Between late Tuesday and midday Wednesday, water overtopped the westbound lanes of Highway 60, the main route between Poplar Bluff and Sikeston. The state Transportation Department piled sandbags to keep water off the eastbound lanes and keep traffic flowing.

The Red Cross said fewer evacuees, about 275, would stay in the shelter overnight as they find friends and family to assist them. Residents said they're proud the way their community has come together, even with all the water.

"People uniting together, it's a beautiful thing," said Charles Thompson, who was forced out of his home Tuesday and was staying in the shelter. "Hopefully this will bring a lot of people together and, after this, they'll stay together.

"There doesn't have to be a disaster to bring people together."

For KOMU's coverage of the floods from Tuesday, click here.