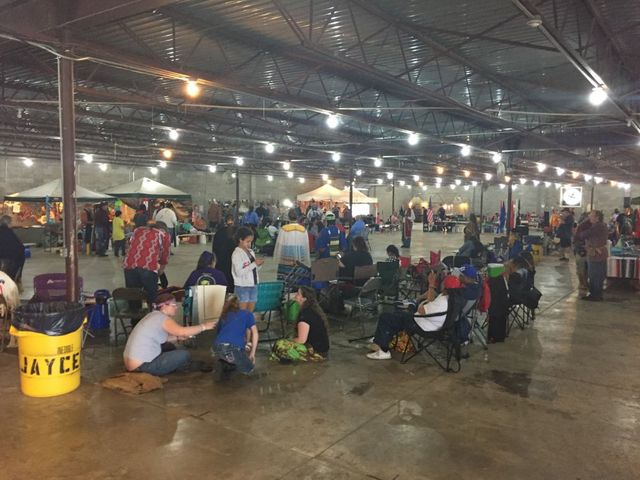 JEFFERSON CITY - Traditional Native American food, crafts and dancing can be found at the tenth annual "For the People" Pow Wow, held at the Jefferson City Jaycee Fairgrounds.

The Pow Wow is a two-day event on Saturday and Sunday sponsored by the Society for the Preservation of Traditional Values and the Jefferson City Jaycees.

A pow wow is a social event where Native American people can get together and enjoy dancing, food and various vendors, according to Greg Olson, one of the events organizers.

Traditional dances to the beat of a drum, native food being made right in front of you and speakers who have been around the culture their entire lives are all ways the pow wow educates visitors.

The Pow Wow brings in honored guests who have been apart of the Native American culture and taught it for many years to speak at the event.

This year the honored guests were Larry Sellers, Ed Smith, and Steve Tamayo.

“What we do is we teach our little ones, our children, the values that we’re supposed to function with," Sellers said. "To help them grow up that way, as an adult, so they know how to be a better human being.”

The pow wow is one of three that happens in the mid-Missouri and brings together Native Americans from across the state of Missouri.

According to Olson, the Native American population in Missouri is very spread out, so the Pow Wow provides a great place for Native Americans to come together and share in their culture.

It is not a coincidence that this pow wow is being held on Memorial Day weekend either.

A large part of the Pow Wow is honoring veterans and those who have fought for our country, which is something important to Native Americans, according to Olson.

“Service in the armed forces, that's a big thing for Native Americans," Olson said. "They have a long tradition of being warriors.”