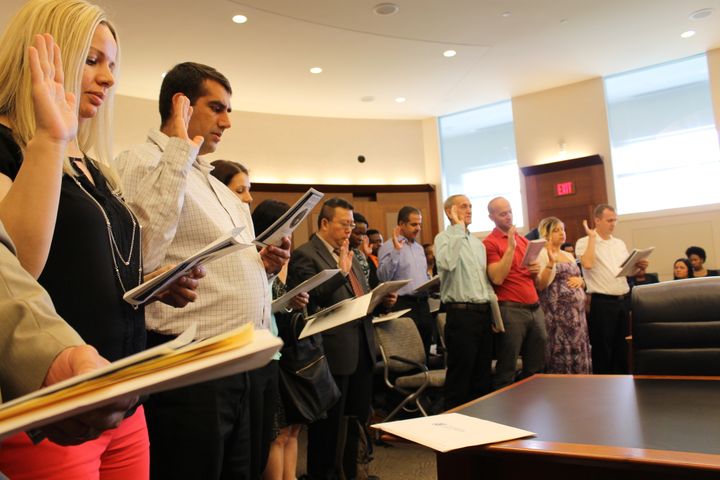 Courtesy of: United States District Court for the Western District of Missouri

The United States District Court for the Western District of Missouri held the ceremony at 11 a.m. in the Missouri National Guard's Klefner Building.

Tyeek Dixon was born in Jamaica. He said he couldn't wait to spread the news to his family.

"Well I just became a citizen so I'm excited. I can't wait to call and tell my mom she's not a citizen yet," Dixon said.

Tania Lock, the deputy clerk for the court, is in charge of giving the Oath of Allegiance.

She said the process is very difficult for applicants.

"Most American citizens that are born here probably couldn't even pass the test that they have to take about the Constitution and their rights as citizens," Lock said.

"It's good to know your history. The country's history. But for Americans they don't even know and I be asking my friends and they be like man 'I don't know this why do I need to know this.' And I'm like, 'well, it's your country you live here,'" Dixon said.

Some of these include biometrics registration, completing an interview and submitting a formal application for naturalization, which is 20 pages long.

The citizens in Monday's ceremony are from more than 30 different countries. Lock said that's on trend with what she's seen.

"We have seen an increase in the amount of new citizens in the mid-Missouri area," Lock said. "Now, we host two naturalization ceremonies a year, with about double the amount of people becoming citizens."

The ceremony involved a color guard, singing of "God Bless America", introducing the applicants, and administration of the oath.

"Once they say the oath, you can see a sigh of relief on their face, and huge smiles and they're so excited," Lock said. "You can just really tell it means a lot to them."

The final step to becoming a new citizen is saying the Pledge of Allegiance.

"It's a really great way for them to show their new citizenship right off the bat," Lock said.

After the ceremony, many of the new citizens could not hold their excitement.

"At the end of the day even though the process might be long and hard its still worth it cause now your free you can do whatever," Dixon said.

Willie Epps Jr., a U.S. Magistrate Judge, said immigrants deserve recognition because of what they have contributed to the United States.

"It's just so important and vital that we replenish this experiment that we call America with people around the world who bring their ideas, their culture, their religions here, it makes us a stronger country," Epps said.

The next Missouri Naturalization Ceremony is May 15th in Kansas City.