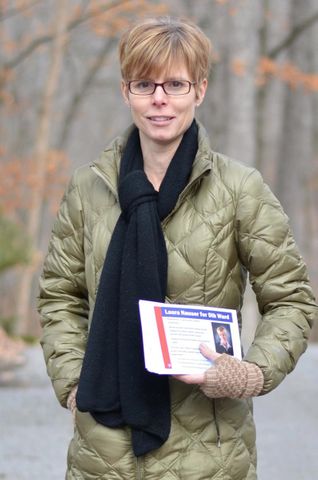 Shortly before 9 p.m. with 100% of the five precincts and all 2,294 votes cast reported, the Boone County Clerk's office projected Nauser as the official winner with 992 votes.  Burns came in a close second with 937 votes, while Jones trailed in third with 365 votes.

At an election night watch party at D. Rowe's restaurant, Nauser waited with friends and family as polls closed and final votes came in.  Columbia Mayor Bob McDavid later appeared to congratulate Nauser on her victory.

Of her win, Nauser said, "I'm very thankful the voters in the fifth ward decided I would be the best representative. It was close. My fellow candidates--we had a good race, so I thank them and hope to work with them in the future to bridge the gap in the community and work on the things that are important to all of us."

Nauser served two consecutive terms as the fifth ward member of the Columbia City Council from 2005 to 2011 while serving alongside McDavid as Mayor Pro Tempore for two years.  In 2010, she lost to democratic challenger Chris Kelly in a race for a seat in the Mo. House of Representatives.

She opted to run for the City Council again after claiming there were "issues transpiring" that she felt she "needed to be addressed."  She elaborated, "I was very active on working on youth and family issues. Those issues had not really been addressed over the last couple of years, and I think that's kind of reflected in some of the crime issues we have. I work with at-risk youth, so I wanted to get back to the City Council and bring that to the forefront again and be an advocate for that."

Nauser has campaigned on a platform in which she professes to expand the Columbia Regional Airport and address gang issues in her ward.  She also said she will work among the Council members and across party lines to "legislate by policy and not by project."

Nauser acknowledged the project that has generated significant discussion and debate in her ward is a $6.6 million proposal to revamp Providence Road in the Grasslands area.  As the newly-elected fifth ward member, she said, "I think it's important that we go back, look at [the Providence Road proposal] and come up with maybe a better project and have more community input. I was very upset that we didn't have any interest in party meetings for that process. I know the stakeholders all met and worked together, but we didn't have a community meeting where everybody in the community, including the stakeholders and the taxpayers, were able to come and voice their concerns."

Also in attendance at Nauser's watch party was Rep. Caleb Rowden (R-Boone County).  He expressed his strong support for Nauser, saying, "I met Laura during my campaign and got to know her well. We obviously come from the same political ideology and believe a lot of the same views of government and so it was good to get to know her, and she did a great job on the City Council the first time, so there's no reason to believe she wouldn't do a great job this time."

Since Nauser is replacing Anthony, who vacated her seat to move closer to family in Rhode Island, her term will expire in April 2014.