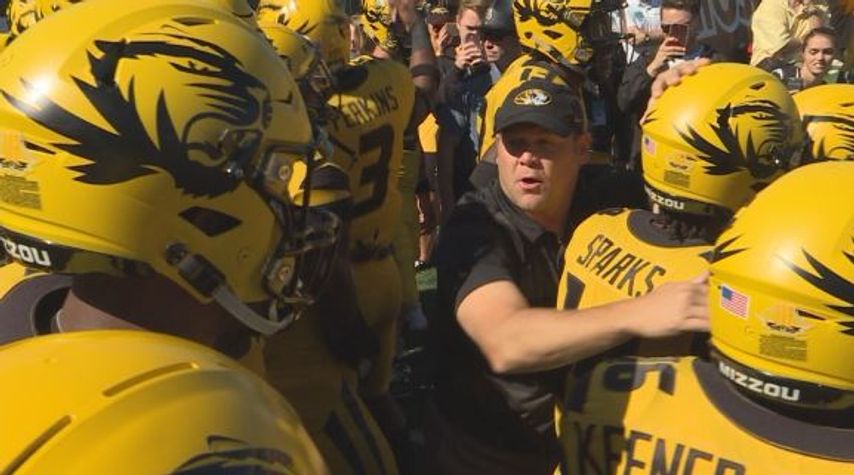 The sanctions against Mizzou Athletics would keep the Tigers football team out of the next postseason.

Odom said, "I am looking forward to assisting in the appeal's process very directly as much as I can."

He said he was told about the sanctions around 9:30 a.m. Thursday and held a team meeting to inform his players at 11 a.m.

He finished the meeting by talking with the seniors and telling them what he is going to do during the appeal.

Odom said he was very disappointed to learn of the sanctions and noted the players who cheated by letting a tutor take tests and do assignments are now gone.

Odom said the university was praised for its exemplary cooperation with the NCAA during the investigation.

"I feel strongly moving forward with the appeal process and we feel really strongly about the case we have," he said.

If Mizzou's appeal is denied and the sanctions remain, Odom said, it would be wrong since the university was cooperative.

"If the committee on infractions doesn't take a stand on this appeal, that leaves a lot of gray area for how to handle the approach of doing everything you're supposed to do," he said.

There is no timeframe for when the university will make the appeal.

Choi said he disagreed with the punishments MU is receiving. He said the sanctions are "shockingly inappropriate and not to the standards of fairness that we expect of our governing bodies."

He said the university system prides itself on being held accountable.

“We as Missourians value hard work and telling the truth. I encourage everyone to stand with us and raise your voices as we fight not just for Mizzou, but also to defend these values,” Choi said.

Sankey said the SEC is ready to advise and assist the university with its appeal.

"We are seeking to understand the committee’s decision related to the severity of the penalties applied to Missouri, particularly in light of the university’s exemplary cooperation in the case," he said.

Blunt said he "completely disagrees with the sanctions.

"I strongly encourage the NCAA to take another look at this case and not punish today’s upstanding Mizzou athletes because of isolated violations that occurred years ago," he said.

Blunt said Mizzou and the state of Missouri deserve "a second look at the facts of this case.”