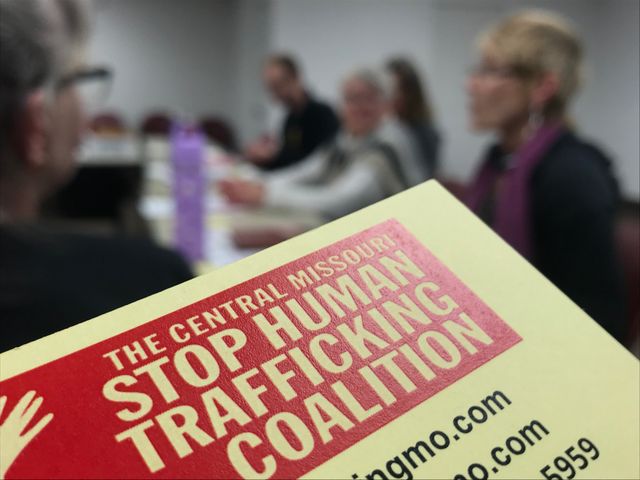 COLUMBIA - “I can still go to a presentation and hear somebody say, ‘I only thought that happened in other countries.’ And until I don’t here that anymore, we have to keep educating,” said Nanette Ward, a Central Missouri Stop Human Trafficking Coalition board member.

The coalition met Thursday for its monthly meeting to discuss recent legislation and to educate anyone who attended about human trafficking in Missouri.

An investigator from the Missouri Attorney General’s Office was also in attendance to explain how the office handles hotline calls when they come in. The investigator explained the enforcement unit helps the caller find the right department and the correct resources.

The investigator told KOMU 8 News each of those cases had a point person for the caller if he or she chose to offer up contact information.

“We should all be concerned, no matter what the ranking that we have children who are going to our schools being trafficked,” Ward said.

“There’s not this unusual group of people that are purchasing people. That it is all of us, you know, we work with those people, we’re in the grocery store with those people, you know, they’re the fathers, the college students. We have to just recognize that the demand is all part of who we are in the community.”

Ward reflected over her 10 years with the coalition. She said, “We did a day at the Capitol, and we had information out and people came by and said ‘oh I thought we handled that already. I thought we passed a law. Didn’t we do that?’ They didn’t understand the complexity and the enormity of it.”

She continued, “Certainly things have changed, attitudes have changed, understanding’s changed since then,” but she said there’s still much work to do.

A survivor of human trafficking in Missouri told KOMU 8 News she’s hopeful new legislation at the local and federal level will help women being trafficked and those who are trying to help them escape.

“Majority of the cases they say, well, you’re going to jail for this instead of, can you get out of this situation. And so getting a different perspective of things will help them not only help people but possibly end the cycle,” said the survivor.