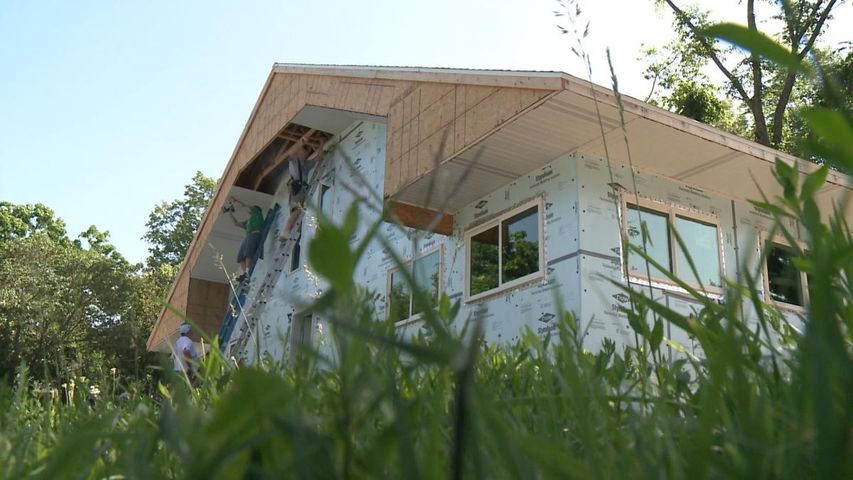 COLUMBIA - Work is running behind schedule on a house under construction designed to operate with no net cost for heating and cooling. The city of Columbia teamed up with Habitat for Humanity and Peoples' Visioning last summer to build a "net zero" house at 413 West Ash Street that can sustain itself.

"We were hoping to get it done last December," Bill View, Columbia's Habitat for Humanity executive director said. "It wasn't an expected date, but we would have liked to have done it, and things have just delayed enough that it was slowed down,"

Habitat for Humanity has built more than one hundred houses in mid-Missouri, but none like this.

"There were some more challenges with this project, but I think it's been a really good learning process for both Habitat and the city," Randy Cole, Columbia's housing programs supervisor, said.

The city used roughly $65,000 of federal HUD money to fund a little more than half of the project, which View said costs $107,000. View also said anytime the city uses federal money, there is a delay.

"So that delayed us six months in the project, and after that it was winter time when we started," View said. "So it was kind of hard to get the concrete in the ground and get it going."

View also said this isn't a typical Habitat build. He said most houses don't have anywhere as much foam insulation used to cover the house.

"You can just think of this house as insulation on steroids," View said. "The extra foam reduces that transfer of heat and cold through the floor of the foundation which obviously makes it less expensive to operate."

But View said these material differences alone aren't what slowed them down.

"The city requested that we use an architect in this project, and the architect designed us with a steeper roof than we normally put on houses," View said.

The architect also talked Habitat into building a loft.

"We're working a lot higher than we normally work, and that's been a challenge for us," View said.

They're also putting in solar panels, which is something Habitat has never done before.

View and Cole said the new estimated completion date is sometime this fall. When the house is finished, there will be an open house to let everyone in the community have an opportunity to come and see the finished product.

After that, View said the process of buying the home is a bit different from normal Habitat homes.

"Normally we go through the process with our family selection committee, and this house we're not going to do that," View said. "We're going to open it up to the public." View said the qualification to buy the home would be for families living at 80 percent or below of the federal poverty level.

Cole said Columbia Water and Light put about $18,000 into the project for some of the energy upgrades. He said the house will go on the market for $107,000. Any profit made on the house will go toward Habitat's next project.

Habitat said they already have several people interested in the home.

"I'm pretty sure that we're not going to have any trouble selling this house," View said. "For one, the price is right, and there's also a down payment assistance through the city of Columbia through another HUD program."

View said Habitat will sit down with the new homeowners and go over everything the house is designed to do.

"Hopefully they'll come in with a sense of 'I've got an opportunity here to live in a house that is going to take less energy and actually put some energy back onto the grid,'" View said. "Hopefully they'll embrace that concept and enjoy living in the house and using it to its full potential."

Cole said, "There's always an element of risk involved, but I think they do a lot of leg work on the front end and make sure that home buyer is going to stay in that property, and is going to succeed."

As for plans to build another net zero house, View and Cole said they will evaluate the project upon completion.

Cole said, "The whole purpose of this project was to see what more we can do in terms of energy efficiency, so we're going to take the information we gain from this project and learn what is practical going forward for kind of pushing the envelope of what we're doing."

View said, "This is going to be a good learning experience for us, and we can evaluate and see if there is anything we can take out of this home to put into another one."