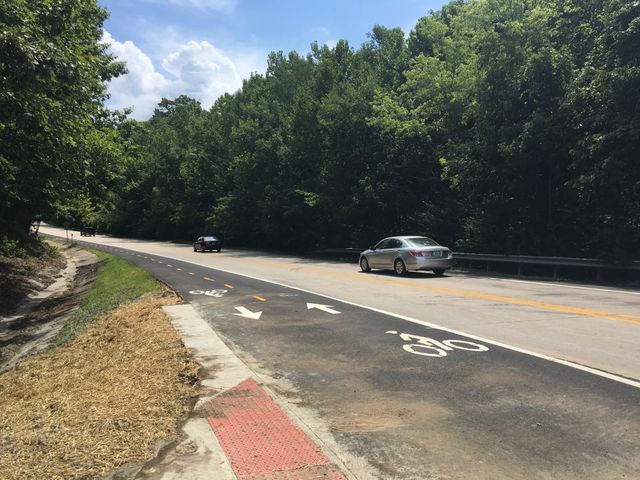 COLUMBIA -  Cyclists were out on Friday enjoying new bike lanes along the shoulder of Forum Boulevard. The new lanes are part of the Hinkson Creek pedestrian bridge project.

The engineering supervisor for Columbia's Public Works Department, Allison Anderson, said a pedestrian bridge should be completed by late August.

"This project is part of the non-motorized Get About funds that we're doing. It's a project just to get people from the Katy Trail across the Hinkson Creek and up through Forum that way," Anderson said.

The lanes are five-feet wide, going in both directions of traffic, and run side-by-side on the same side of Forum Boulevard. The bike lines currently run from Crestwood Lane up to Hinkson Creek Bridge, right before Wilson's Fitness Center.

Anderson said installing both bicycle lanes of traffic on the same side of the road was not ideal.

"Originally we were going to do both sides, but we had some easement acquisition issues," she said.

According to Anderson, Public Works tried to get permission from the Woodrail Homeowner's Association to build the bike lanes on each side of traffic, but some property owners would not permit the City of Columbia to draw bike lanes within their property lines.

Anderson explained, "Where you come off the bridge, we would have had to go through private property to be able to get up to the shoulder, and we weren’t able to get that easement. So we just kept it all on one side. That shoulder’s wide enough so that we could put both the bike lanes on one side."

Anderson said although more space between lanes is ideal, it's still safer than having bicycles ride on the main road.

"Forum is just a very busy street. You have all the traffic turning in and out of Wilson's right there too that backs up. You're trying to watch for traffic, but also keep an eye on pedestrians, it's just a lot for drivers or pedestrians to keep track off," she said.

Minor work still needs to be completed before the bridge opens to pedestrians and cyclists.

“There’s still a lot of handrail that needs to be put up...some signs need to go up as well," she said.

Public Works also filmed an informational video about the pedestrian bridge, which will be released before construction is completed.