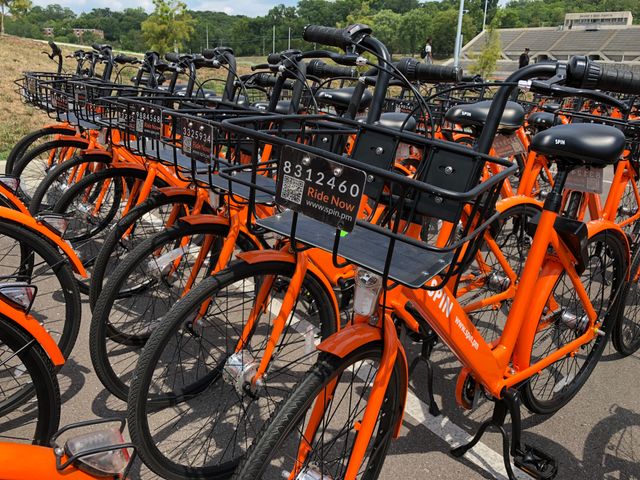 JEFFERSON CITY - Jefferson City Parks, Recreation & Forestry will make 75 bicycles available for people to rent throughout the city. After two months, the agency will  determine whether more rentals are needed.

JC Parks spokesperson Amy Schroeder said the idea for the program started a couple of years ago with the support of Capital Region Medical Center's Healthy Schools, Healthy Communities grant.

"Jefferson City has awarded that program to Spin Bikes, so what you’ll see is a bunch of orange bikes scattered throughout town," Schroeder said. "We're seeing where people want to use them, and then we'll plan accordingly."

Schroeder said there will be no set locations for the bikes. People can use the app "Spin," available for both Android and Apple devices, to locate the nearest bike, pay for the rental and unlock it.

People with no access to a smartphone will be able to purchase "Spin access cards" that will have a code to unlock bikes.

Those cards will be sold in different yet-to-be-chosen locations. For now, people can purchase them at the Linc complex.

Each 30-minute ride will cost $1, but Spin Bikes will also offer different subscription programs. After each trip, riders will just have to park the bike in a location that is most convenient for them.

"I think it's a good idea, I think it's nice to get people out and enjoy the downtown and the other areas that they are going to offer the bikes," she said. "However, I do worry about the sidewalks and sharing, since I am a downtown walker, the sidewalks with bikers. There's really not very much room with tables and areas outside downtown."

If a user leaves a bicycle on the way of pedestrians, Schroeder said, Spin will be responsible for relocating those.

"When that happens, Spin will be notified and they will send somebody designated to move those bikes to a desired location,” she said.

Resident Cassie Mahon said she would consider riding one of the rental bikes.

Bikes are equipped with solar panels and GPS, so Spin can track each unit.

"For vandalism and people possibly stealing the bikes, they don't seem to be concerned with that,"  Schroeder said. "There's always a case where that could happen, but with this being a business put on by Spin they are responsible for replacing those bikes, which is great for the City of Jefferson, for JC Parks, because we are not being held liable for any of that property."

Schroeder said JC Parks' contract with Spin is valid for a year, with the possibly of an extension for another twelve months after a revision process.

She said the program could offer more than just bikes in the future.

"Eventually, we hope to get to a point in the next few months where Spin would bring scooters to Jefferson City,"  Schroeder said. "We have talks going with different city departments to make sure that we're approaching this in a safe manner"”