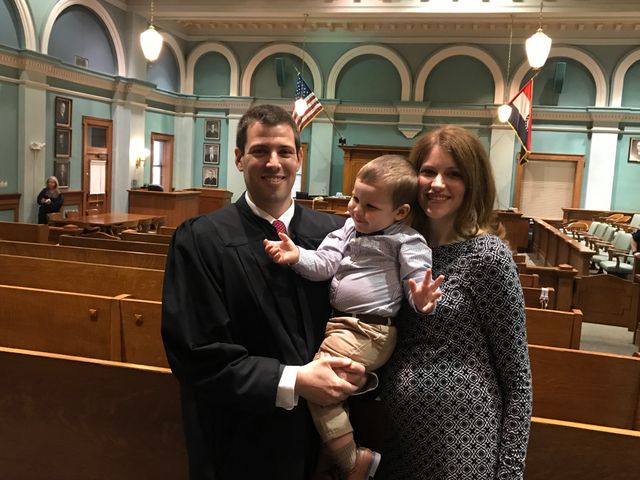 COLUMBIA - Boone and Callaway County has a new circuit judge.

Governor Greitens appointed Jacobs a week before the ceremony, October 13.

Jacobs is replacing Senior Judge Christine Carpenter, who is retiring after 18 years of service.

At 34, Jacobs is younger than most when they’re sworn in as judges.

His father, John, told Jacobs not to expect the job because older judges were also up for the position.

When Jacobs called his father with the news of his appointment, John said based on his son’s character, he was not surprised.

“Brouck has always been a very confident child all his life ands always exceeded all expectations. So I’m surprised, but I’m not surprised.”

When asked about representing races equally in the courtroom, Brouck Jacobs said, “As a judge I have to listen to both parties and you have to listen fairly and you don’t come into court with a preconceived decision made, you listen to the parties, you hear their arguments and then you make the decision. And that’s what I expect to do.”

“I’ve been a career courtroom lawyer. Almost every day of my career I’ve been in the courtrooms practicing and I’m looking forward to taking the bench and staying in the court room,” said Jacobs.

Jacobs’ father said the courtroom is a natural place for his son.

John said Brouck and his family like to be immersed in the Columbia community.

“To be a part of a community and to see people who care about each other and who are there for each other especially in the difficult times. And we all go through those times, so I look forward to Brouck being able to make a contribution and to be of good service to the people here.”