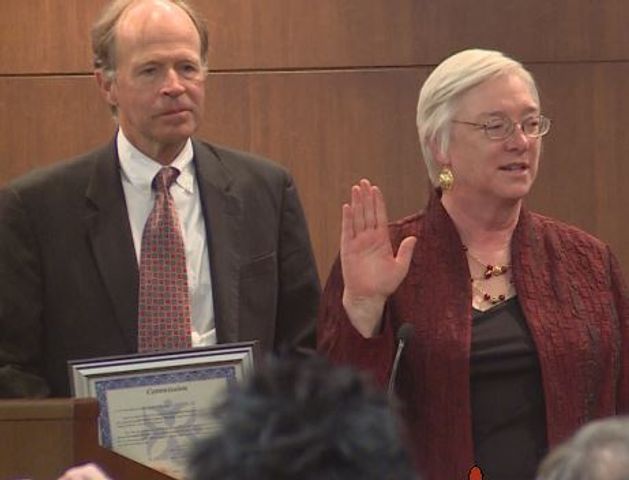 COLUMBIA - A little less than a week after the April 7 election, the city of Columbia swore in the newly elected first and sixth ward council members.

He said he considers himself a social activist and that contributed to his decision to run.

"The first step is to connect with the people in the first ward," Ruffin said. "To get to know them on a personal basis to build those relationships, so they will feel confident that they can talk to me, that I am trustworthy, that they can share their heart, their opinion with me and I will listen."

Elizabeth "Betsy" Peters was sworn in as the sixth ward council member. She is taking the position after Barbara Hoppe's term expired.

She said funding infrastructure and public safety will be key priorities for her.

In Hoppe's last meeting as a council member, she proposed a historic preservation ordinance that could affect the controversial demolition of the downtown Shakespeare's Pizza.

KOMU 8 asked the newly elected officials how they would approach the topic.

Ruffin said he did not want to comment on any specific upcoming agenda issues until he has more time to gather the facts and formulate an educated opinion.

Peters on the other hand said she believes she would support legislation that protected historic properties.

"I probably would, yes," Peters said. "Because I don't think they have a plan yet, so I don't really think holding up the demolition would hold up their project."

The next city council meeting is scheduled for Monday, April 20. Follow the link for more information on the proposed ordinance and the planned demolition of Shakespeare's.