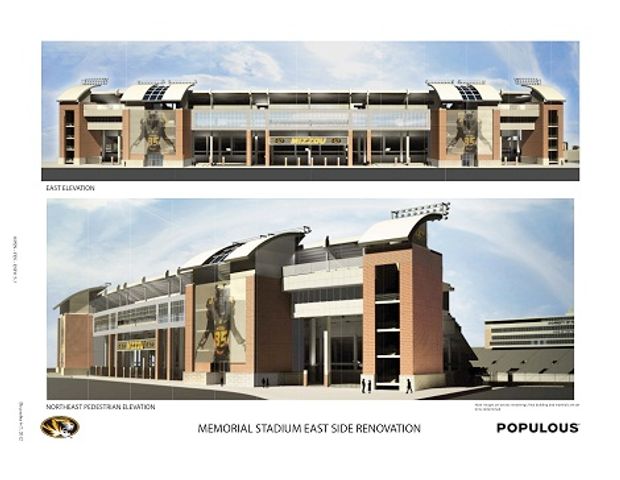 COLUMBIA - New drawings for Missouri's Memorial Stadium expansion were released as part of the December 6-7 Board of Curators agenda.

According to the agenda, the plan is to renovate both the west and east sides of Memorial Stadium.

The renovations to the east side, which holds the student section, will cost $45,550,000 and will be completed by late summer 2014. The plan is to add new bleacher seats, club seats, lounge spaces, restrooms and concessions.

The club level will contain indoor and outdoor seating for 1,200 fans. The new level of bleacher seats will seat around 4,100 fans.

Meanwhile, the renovations for the stadium's west end are scheduled to be complete in time for the upcoming 2013 season. The west end is projected to cost $9,750,000.

In addition to updating existing suites and club seating area, the plans call for adding two new suites that would seat around 60 additional fans.

The Board of Curators approved the expansion this summer. It carries a pricetag of almost $55 million. All that money comes from revenue bonds supported by ticket sales. The board meets Thursday and Friday and will review the design.

Currently, Mizzou's stadium is the 10th largest in the Southeastern Conference, seating 71,004. After renovations, Memorial Stadium will rank ninth. The SEC's largest stadium is Tennessee's Neyland Stadium seating more than 102,000. The smallest is Vanderbilt Stadium which doesn't quite seat 40,000 people.