New I-70 bridge slides into place over Range Line Street 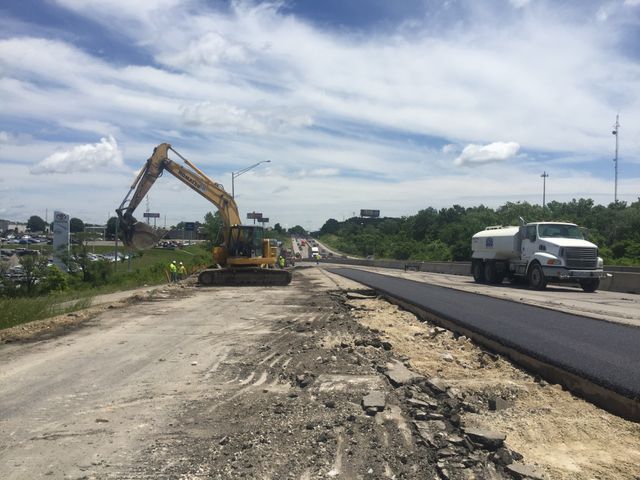 The process began at 7 a.m. and finished around noon.

The Assistant District Engineer for the Missouri Department of Transportation- Central District, Travis Koestner, said the project is being done over the weekend to lessen the impacts on drivers.

"The contractor Emery Sapp and Sons and their designer, Parsons, chose to do the project this way, to slide the bridge, to minimize the impacts of traffic," Koestner said.

Branch Manager for Emery Sapp and Sons, Chip Jones, said that the sliding bridges in place is "innovative" for Missouri.

"We built the bridges off to the north, kept traffic over there while we built the next set of bridges to keep the traffic moving," Jones said. "So this is the final piece for Range Line is to slide to the westbound bridge from the north to the south to put it back in its final alignment."

While the project was taking place, lane changes rerouted traffic to move around the bridge work.

The I-70 bridge project designs are being done by Parsons Corporation. An engineer with Parsons Corp., Tim Broyles, said using dishwashing soap is an approach they came up with.

"It's a very simple approach," Broyles said. "There's unique details to the bridge that allow the slide."

Broyles said the bridge slide went as they planned without any issues.

Construction crews are now resurfacing either side of the bridge and will paint lanes on Sunday.

"We appreciate folks patience finding an alternate route until Tuesday morning," Koestner said. "But really just for folks to use caution and slow down through the work zone."

The ramp closures and lane changes will remain in effect until Monday, June 6, at 5 a.m. However, Range Line Street will not open again until Tuesday, June 7, at 5 a.m.

You can find more information about the project and traffic changes on MoDOT's website.