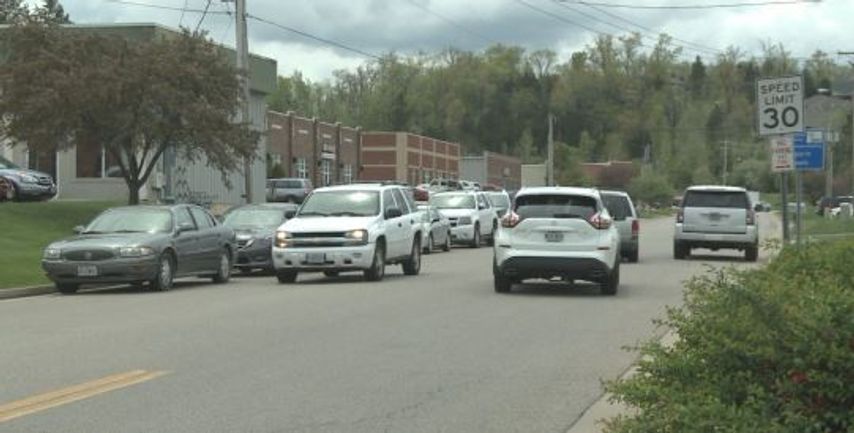 JEFFERSON CITY - Capitol City High School is set to open in August of 2019, and with it will come additional traffic. The city is trying to plan accordingly, focusing on traffic flow on Creek Trail Drive leading to the school.

City engineer David Bange said most traffic will not use Creek Trail Drive,

"We had a traffic study done, and we assume, the main traffic will still be off that interchange at Highway 179," Bange said. "That's about 65% of the traffic. But we still needed to look at another 30% that's coming off Creek Trail Drive."

"Our main concern is Edgewood Drive," Bange said. "Right at that intersection is where most people who park on the street park, and coincidentally, it's also where we have the most traffic and need the most space for cars."

Bange said eliminating on-street parking would allow the city to extend the turn lane pocket at the intersection.

"Right now, we have about 100 feet between West Edgewood and Creek Trail Drive that is marked no parking," Bange said. "That left-hand turn pocket is about 40 feet long and the line of cars would probably actually closer to 200 feet. That problem already exists today, but it would just be exacerbated as we move on and more traffic enters the situation."

"Right now, we really utilize that on-street parking," Cook-Williams said. "We have a pretty small parking lot and this place gets pretty busy on Thursday, Friday and Saturday. And we often have customers coming pulling a trailer so they can pick up large furniture. We want to make it easier for them."

If the city does eliminate on-street parking, Cook-Williams said Habitat for Humanity's parking lot is not large enough for the amount of customers.

"Really, our main concern is that we are a non-profit, and we use all the money we make at the resale shop to build homes in the community, so expanding our parking lot is really not an option for us," Cook-Williams said.

Cook-Williams said she is also concerned about traffic backups once the high school is built.

"When I leave around 5 or 6, it's backed up," Cook-Williams said. "It's hard to make a left-hand turn out onto Edgewood now, and you worry about the safety, especially with new drivers. Trying to have 16 year olds turn out onto a busy street is going to be a mess."

Bange said he acknowledged the left-hand turn backups would not be eliminated right away.

"In the short term, we can't really address those concerns for the left-hand turn because it will be bad, but by eliminating the on-street parking, what we will be able to do is allow the person who is trying to make a right-hand turn, who would otherwise be stuck behind the line trying to turn left, to go ahead and make it up to the stop sign."

Bange said drivers won't see changes right away, but he believes if everything goes smoothly, City Council will approve the construction, meaning "No Parking" signs will go up and road striping will begin as soon as mid-June.