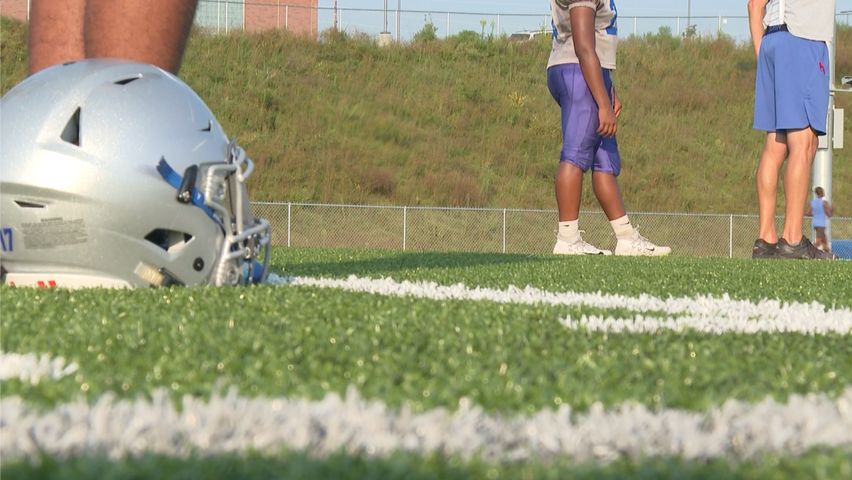 JEFFERSON CITY - After months of playing the waiting game, we've finally made it to this point.

Teams have worked all summer with the possibility of a season being taken away before they even step onto the field.

But here we are. Our game of the week features Capital City taking on Warrensburg in it's first ever varsity football game!

The Cavaliers are the 'new kids on the block' in Jefferson City, joining the Central Missouri Activities Conference along with Jefferson City, Helias and the Columbia Public School District.

However, Jolley and his squad find themselves on the big stage now, prepping for their rigorous schedule.

"Obviously, it's going to be tough and we might have a disadvantage physically as we get deeper in the schedule," Jolley said. "When we leave [practice] we want to be confident about what we're going to put on the field Friday. When I say confident I mean ball control... there's going to be a lot of nerves on Friday night because this is the first time for every kid on our team."

Jolley has his hands full building a new system in a new program from the ground up. A staple of Jolley's offensive scheme is the "Wing-T" formation. This formation features a single-set receiver with one back behind the weak-side tackle and the other four feet behind the tight end.

A run-heavy scheme that Jolley said is what he knows best.

"I was always told from older coaches to always do what you believe in," Jolley said. "We have fun coaching it and I think our kids have adopted the style, so for us it's been a great fit here."

Jolley hopes to carry over the success that he had at Eldon. Jolley went 11-2, putting up an average of 47.6 points-per-game. He said the reason this offense is so successful is because it's about a "team first" mentality instead of just one player.

"It really does spread the wealth," Jolley said. "It's about eleven blue-collar people that are selfless and want to work together for one goal, instead of watching maybe one guy do everything, or throwing the ball to the same guy, or doing those types of things."

One of those guys will be Ethan Hood, an incoming junior, running back for the Cavaliers. He said COVID-19 took it's toll but now they're ready.

"This year's different with COVID," Hood said. "We've kind of made do with every opportunity we had."

But they made it and the coach is just excited to be back.

"Turn the lights on on Friday night and get in the game," Jolley said. "Win or loss, you play your butts off and you get after it."