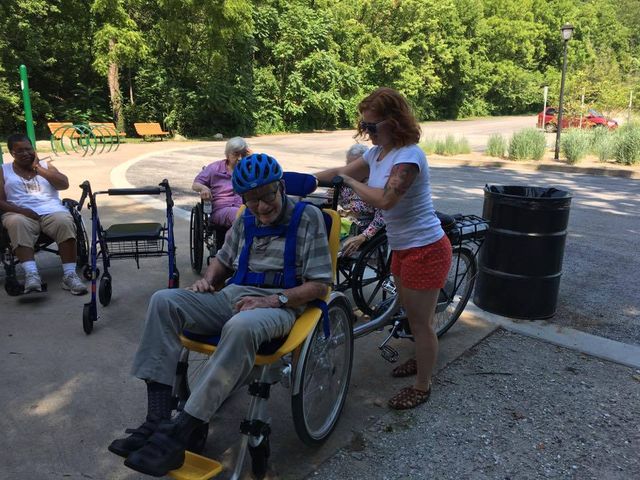 COLUMBIA - The Columbia PedNet Coalition is launching a new program that helps disabled and elderly residents get active outside.

The Giving Rides program uses a special tandem-style bike to push participants along nearby trails.

"The difference is instead of there being pedals in the front, there's a wheelchair in the front and it's got straps and a footrest. It also has an electric assist [if] the person in the back comes to a hill or needs an extra assist," PedNet's Program Coordinator Heather Marriott said.

Marriott said she came up with the idea because she wanted to provide a way for all Columbia residents to be active.

"It's a program for people who want to want to use the trail but can't anymore because of age or physical disabilities," Marriott said.

One local retirement home said it's already seeing positive effects from the program on its residents.

“They loved it. Some were a little bit nervous about getting into it but once they saw someone try it out they were more confident and they absolutely loved it. They woo-hoed, gave thumbs up, smiled and they really enjoyed it," The Bluffs Executive Director Colleen Hollestelle said.

One Bluffs resident said he used to run along the same trail and was happy to get back out after almost 25 years.

“I used to go south from Stadium, this time we went north. But it was nice to ride up there, in fact I had never gone up north of it before. I was able to see the changes to the trail, it was an enjoyable ride," resident Scott Searles said.

Hollestelle said the experience is something the residents really enjoy and can see the impact it has on their day-to-day lives back at the home.

“It’s been a really great opportunity for our residents, they have the chance to go outside and sometimes go out with family. But even though they are not pedaling there’s a different value to go out and just move freely on the trail recreationally," Hollestelle said.

Marriott said she hopes to expand on the program in the future to add more participants and bicycles.