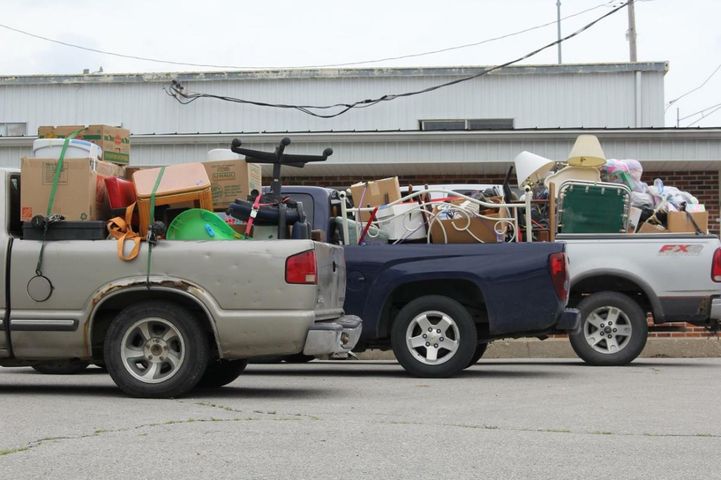 "We've started another drop off site here like we did in Columbia," Sprinkle said. "I'm reaching out to all the small towns because they don't have the resources we do in Columbia."

Sprinkle said the effort began when she met a man from Tipton at one of her donation sales.

"I was having a donation sale here at the drop-off site and a gentleman's son, came up to us and told us the situation," Sprinkle said.

The man that spoke to Sprinkle is the son of military veteran Charles Cozine.

Charles Cozine served in the Vietnam War and was discharged after being injured by a grenade.

Cozine said once he went home, problems developed in result of his injury.

"I lost both of my legs," Cozine said. "I had to have them amputated, partially because I was a diabetic too."

Cozine said he had a nice wheelchair until he lost it and everything else when his home caught fire in November.

"I lost my chair, and then I got this one," Cozine said. "It's about wore out already."

He said he has been trying for months to reach out to veteran, hospital and state medical organizations to get an automatic wheelchair, but has had no luck.

"I've tried going through a lot of people and nobody wanna help," Cozine said. "At the recruiting station. They just said no we cant help you. They never really said why."

Cozine's son, Brandon Ellsworth, said he reached out to Veterans United and other similar organizations and companies but was told they could not help his father because he was already discharged from the military when his legs were amputated.

Cozine said his family simply does not have enough money to buy an automatic wheelchair at full price.

"I cant afford 'em," Cozine said. "They're too expensive. I have tried finding organizations and associations that deal with vets, or through the government, that can help me pay a portion of the price for one, but no one can help me."

Ellsworth said he saw something about Missouri Pay It Forward and spoke to Sprinkle to reach out for help on getting the wheelchair.

Sprinkle said she agreed immediately to help him.

"Ever since then we've been trying to raise some money for him," Sprinkle said.

Sprinkle said they're going to raise the money through donation sales.

"I put online that we're having a donation sale, and then people instead of having their own yard sales, they'll come pick it up and we use it for the donation sale to raise money for them," Sprinkle said.

Cozine said not having a car or automatic wheelchair has made it hard for the family to transport him from place to place.

"Any place my family wants to go we walk," Cozine said. "My son, he pushes me or I wheel myself. It's pretty hard wheeling out here on these sidewalks 'cause they're all bumpy and cracked."

Missouri Pay It Forward Moniteau County Outreach Coordinator Miranda Peoples said she is excited to be a part of the new location in Tipton to help Cozine.

"‘Cause everybody needs the chance to get out and freely go places and do things," Peoples said. "I mean, I don't feel anybody would like to be stuck in their home, or feel like they're a burden on another person. That would be depressing."

Peoples said she plans on hosting the donation sale in Tipton to raise money for Cozine's wheelchair through a car wash or yardsale.

Sprinkle said they've also created a PayPal account for Moniteau County Missouri Pay It Forward, and all proceeds will go to the wheelchair fund.

For more information about Missouri Pay It Forward visit its Facebook page.