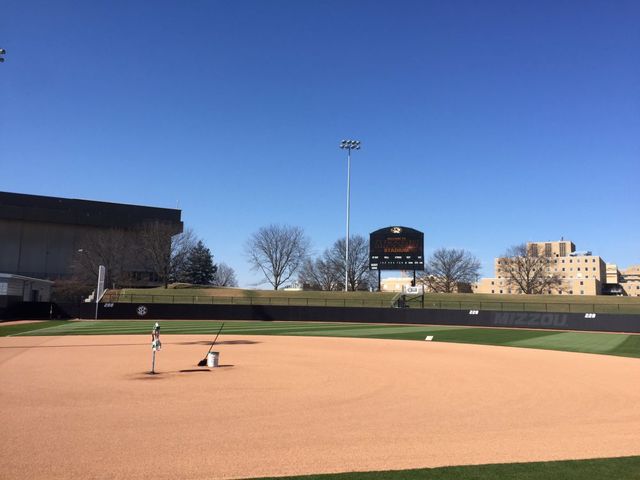 COLUMBIA - The Missouri softball team switched stadiums for the first time since 1981 when the new Mizzou Stadium opened Friday.

The Tigers hosted Oregon and Stephen F. Austin as a part of the Mizzou Tournament.

Mizzou Stadium cost $17.5 million to build. The Mizzou Athletic Department broke ground on the site of the stadium March 1, 2016.

The stadium is located just East of the Hearnes Center right off of Stadium Boulevard, where Mizzou Athletics Associate Athletic Director for Communication Chad Moller said a 480-foot home run could land on the road.

New amenities the stadium has to offer include expanded seating, a VIP section, and an LED scoreboard.

The stadium bleachers can fit about 1,600 people, according to Moller. An additional thousand can fit on the berm just beyond the outfield fence.

Moller also said he sees the new stadium as more than just a facility upgrade.

"This facility will help coach attract some of the best talent in the country, and we're already a top program but this will definitely help."

Moller said a new stadium had been a long-time dream of head coach Ehren Earlywine, and that he had even pitched the new stadium to past recruits.

The Missouri softball team had called University Field home from 1981-2016.

Murphy, who had gotten a sneak peak at Mizzou Stadium before the first game started, said the new stadium is a major improvement.

"This program deserves it, the field over there wasn't the best," Murphy said. "It wasn't the worst either, I've seen worse. But it definitely needed some upgrading, and they got this opportunity, and this place is phenomenal."

According to Moller, the players are feeling the excitement of the new stadium as well.

"It was fun yesterday, the first swing by somebody, they'd be excited about 'Oh, that was my first swing here,' or the first ground ball, those kind of things," Moller said. "We'll be recording the first of everything going forward so we'll have fun doing that too."

In their first two games at the new stadium, the Tigers lost to Oregon 10-3 and beat Stephen F. Austin 14-6.

Missouri has four more games to play at Mizzou Stadium over the weekend.