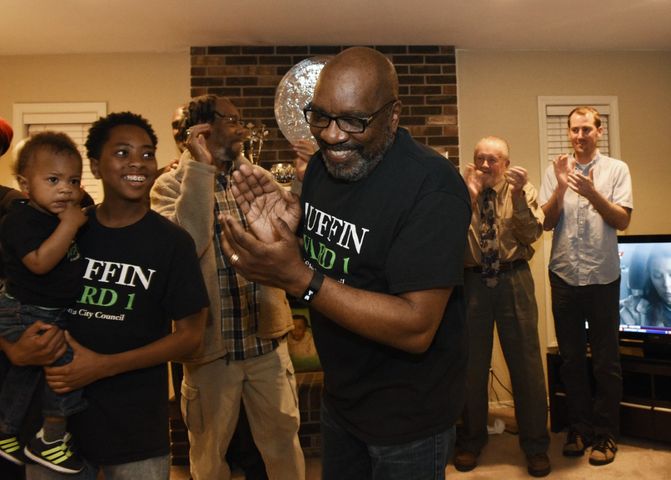 "He's a perfectionist," Mary Ratliffe, president of the NAACP chapter in Columbia, said."If he thought he was not going to be able to give it the time to do it justice, he would not have done it."

After serving two terms overseeing Ward 1, Ruffin decided it was time for a new chapter.

"Between the church and my family and the 'Blind' Boone home and the city council, it is very difficult to keep up with all the personal requests that come," Ruffin said.

He announced in October he was not re-running after two terms in public office.

To many, he is more than just a city council member. He is also the chair for the JW "Blind" Boone Heritage Foundation Board and Senior Pastor at Second Baptist Church.

Ratliffe, who also attends Second Baptist, said Ruffin's community involvement is part of the reason why she convinced him to run for city council in the first place.

"I twisted his arm a bit," Ratliffe said.

But she said she knew he would be a good fit.

Ratliffe said that is the reason she also wanted to see more representation on the city council.

"With the representation of Ward 1 and the fact that there were no minorities on the city council, it was important for us to have some representation from the African American community," Ratliffe said.

"When there are issues that are unique to the African American experience in Columbia, I am the champion," Ruffin said.

Valerie Shaw, a member of Second Baptist Church, helped Ruffin campaign the first time he ran. She said she feels the impacts of his decisions despite not living in Ward 1.

"I felt good, even in my ward, having someone who understood the plight or issues or concerns that people of color have," she said.

"The African-American community is all over Columbia," Ruffin said.

Throughout his time in office, he restored the "Blind" Boone Home in downtown Columbia and marked the place of James Scott's 1923 lynching by the Stewart Bridge in Columbia.

"I hope it made a difference in the history of Columbia and how we see ourselves as citizens of this community and that will we will make a commitment to not allow injustice to fester here ever," Ruffin said.

"I think him being in office helped him see some of those things to fruition," Ratliffe said.

Shaw said the community will be sad to see him leave office.

"I have heard from a couple of people that they're sad about that, so he must have satisfied some people for sure," she said.

"Whoever takes that position is going to have some big shoes to fill," Ratliffe said.

Ruffin said he hopes his predecessor is comfortable with diverse communities.

"So, they'll be equally comfortable with the African American community, truly sensitive, invested in learning the best they can and becoming a spokesperson for that," he said.

Ruffin said he wants to have more time to dedicate to his friends, family and church.

"Sometimes, it's difficult to focus on issues of the city that are addressing things such as sidewalks and neighborhood issues and development and things like that when you're dealing with life and death issues on the other side," Ruffin said.

"I hope that they continue to fight for progress for the inner city," Shaw said.

Although Ruffin is not re-running for a seat on Columbia's City Council next year, he is not done serving the community.

"I have a vision for another project," Ruffin said. "It'll probably make me just as busy as I've always been."

He said he wants to open a community center in Ward 1.