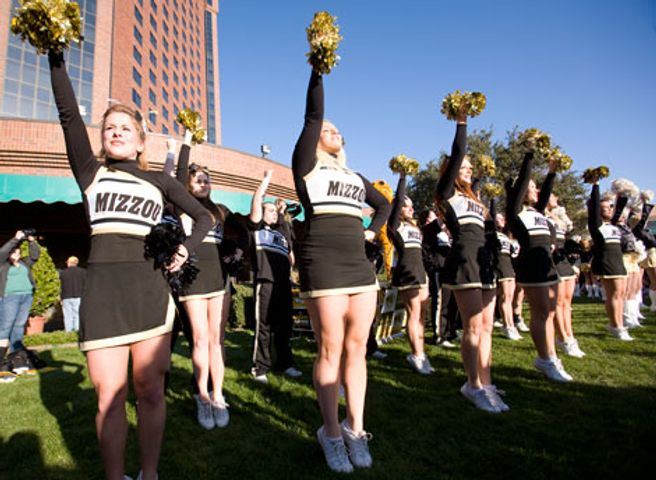 COLUMBIA - The American Academy of Pediatrics (AAP) recently released new recommendations to prevent cheerleading injuries, urging states to classify cheerleading as a sport. The new classification would put cheerleading under the same safety guidelines as sports like volleyball and football.

According to the AAP, 66 percent of all catastrophic injuries of female high school athletes over the past 25 years were from cheerleadering. Since 2007, approximately 26,000 cheerleading injuries are reported each year.

Some of the new AAP recommendations include:
-Requiring physicals
-Granting access to strength and conditioning coaches
-Mastering a skill before progressing to the next
-Performing stunts only on a mat or on grass/turf surfaces, never on hard or wet surfaces
-Banning pyramids more than two people high

Assistant executive director of MSHSAA, Davine Davis, said Missouri schools already follow most of the guidelines AAP is recommending. "I think [the AAP report] reaffirms that we're on the right track. And we'll continue to review this, and study it, and speak with our advisory committees about it but it really tells me that Missouri is where it should be and maybe a little bit ahead of the game," Davis said.

According to Davis, there were 40 head injuries reported last year out of a total of almost 6,000 Missouri  cheerleaders.

Kayla Cooper is a junior and a varsity cheerleader at Rock Bridge High School. "We do the same things most sports do. We practice, we condition, we follow the same guidelines. So we do the same work it's just not categorized as a sport," Cooper said.

"Cheerleaders used to be voted on by the school body and it was a popularity contest, Now we have tryouts. They have to go through very rigorous requirements to make the team. We may not be a sport but they're absolutely athletes and they're doing things that are not easy," Kendrick said.

Kendrick said because of the progress of cheerleading over the years, stricter safety regulations have been put in place by MSHSAA and the National Federation of State High School Association.

"I think safety has taken a huge part in cheerleading now and it's really decreased the injuries even though now everyone wants to continually say it's a high injury risk. It is a risk but the steps that are being taken to prevent them have really improved those numbers."

Cooper has been cheering for Rock Bridge since her freshman year. She's a flyer for her squad, which means she's one of the girls the squad lifts and throws in to the air. Her current elbow injury is the only injury she has had from cheerleading. "I fell out of a stunt," Cooper said. The injury didn't keep her down for long. She's already back up in the air brace and all.

"These girls are physically strong, and they're even stronger mentally because it is a high-risk activity and there is that chance that you can get hurt, and for them to be able to overcome that and do the skills that they do is pretty amazing," Kendrick said.

Kendrick said she goes the extra mile to prevent injuries. "We're very very careful about making sure we're following rules to a tee. We don't cut corners, not just because it's a rule but because they're put in place for a reason and we want to protect our kids," Kendrick said. "We always practice perfection before progression, meaning they have to start out at the very lowest level and work their way up before they can go to a higher level of stunt or a higher level of tumbling."