New starters take the field in familiar loss for Tolton 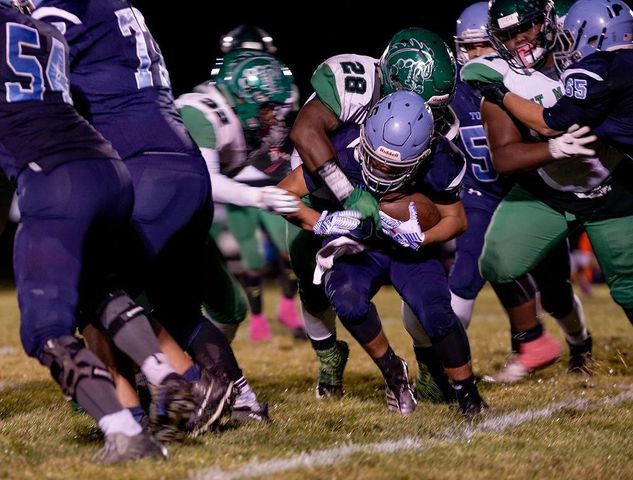 While the 44-6 outcome of Friday night’s Tolton football loss may have looked similar to the Trailblazer’s previous outings, the starting 11 did not.

This week, coach Michael Egnew made a few major swaps on the field, bringing in freshman James Lee at wide receiver and sophomore Jonah Lybeck-Brown at quarterback for their first varsity starts.

As the clock hits 7 p.m., Lee takes a breath and watches his exhale turn to fog in the chilly night air.

Bouncing in place and clenching his fists to warm up, Lee waits anxiously for the St. Mary’s Dragons to kick off.

“I like how it feels to start,” Lee said. “I think (to myself) ‘just make plays, play for your team and do everything you can to get the win.’”

Following a delay of game against the Dragons, the kick is sent, and Lee makes the return before being taken down by two defenders.

The game is underway.

It's the middle of the second quarter and Lybeck-Brown has yet to lead his team past the 50-yard line.

On the next snap, the Trailblazer offensive line holds for a few seconds before crumbling under the force of the Dragons' defense. The rush forces Lybeck-Brown's hand, and he blindly throws the ball out of play into the Tolton sideline.

Frustrated, he leaves the field disappointed in Tolton's offensive efforts.

“I was a little nervous, a little excited to get a shot at things,” Lybeck-Brown said. “I wish there were some things I could have done. I could have been better about some things, but it was good to get in there.”

Egnew uses halftime to discuss how to combat St. Mary’s defensive coverage with increased passing, and the team sprinted out for their next 24 minutes of play.

The Dragons’ offense explodes once again in the third, with senior wide receiver Tim Muxo making three trips to the end zone, one off an interception thrown by Lybeck-Brown.

Lybeck-Brown tosses a short pass to James, who uses his small frame to scramble between defenders. After a short gain, James is taken down by two St. Mary's defenders twice his size. Dazed, he struggles to his feet and manages a single step before falling to the turf and calling over the coaches and trainers.

James leaves the game with an injury, proud of his performance but hoping to do better in the future.

“I thought he (James) did a good job knowing his assignment and just knowing what to do,” Egnew said. “He’s young … so he’s going to have a lot of time to develop and a lot of time to become a better player. These games are really good for him.”

Down by 44, the third quarter comes to an end.

With a running clock in the fourth quarter, the Trailblazers are exhausted but still fighting against the Dragons.

Like a battering ram, senior running back Connor Fogue takes Lybeck-Brown's screen passes through the Dragon defensive line over and over again. He slowly works the ball downfield, keeping possession away from St. Mary’s.

“He played like a younger player would play,” Egnew said. “He’s never played varsity football before, so he had an opportunity to go out there and develop. You could see even as the game went he got better and better, so I’m actually extremely proud of the kid.”

The fourth-quarter connection  was the only Tolton touchdown of the night.

Now 0-7, Tolton will continue to look toward its younger players for support on the field. As a developing team with a small roster, Egnew hopes the playing time will benefit all of the players come their final few games and subsequent seasons.

“All the time I see ‘what do we have to work on’ and ‘how do we improve,’ because that’s kind of what this season is about,” Egnew said. “How do we get better and better and better, and help develop the younger players to get ready for our season next year?”

This is the question the Trailblazers will spend the rest of their season trying to answer, as the remaining games become a baptism by fire for younger players.

Tolton will travel to Warsaw High School at 7 p.m. Friday to face off against the Wildcats.