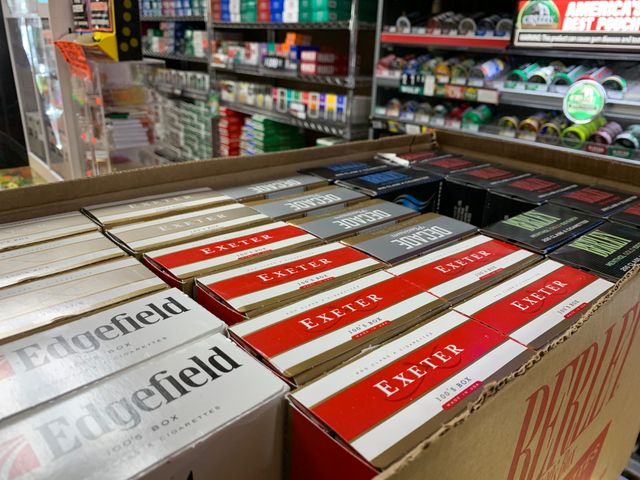 HOLTS SUMMIT - For 11 days, the workers at Up in Smoke haven’t been sure if they're breaking federal law.

On Dec. 20, President Donald Trump signed a spending bill, part of which included raising the minimum age to buy tobacco to 21 nationwide.

The Food and Drug Administration updated its website that day saying, "It is now illegal for a retailer to sell any tobacco product – including cigarettes, cigars and e-cigarettes – to anyone under 21."

However, Missouri's Alcohol and Tobacco Control posted a release on Friday saying the agency won't enforce the higher buying age yet.

"Until such time that ATC receives clarifying guidance from our federal partners, ATC will continue to enforce the 18 year age restriction set by state law," the release said.

This has caused conern for tobacco retailers across the state.

"It's actually been an incredibly confusing process," Joshua Lee said.

Lee works at Up in Smoke in Holts Summit. He said because of the differing messages, the store's owner isn't completely sure of what laws apply.

"We've decided to stay with 18 and up for tobacco and e-cigarettes until we can get clear directives from basically everybody involved," Lee said.

Stephanie Caccomo, the spokeswoman for the FDA's Center for Tobacco Products, said the law went into effect as soon as President Trump signed the legislation.

"It is now illegal to sell to anyone under 21," she said.

Mike O'Connell is the communications director for the Missouri Department of Public Safety, which includes ATC. He told KOMU 8 News the department hasn't received paperwork from the federal government because of the holiday season.

He said for now ATC undercover operations will only check for stores selling tobacco products to people younger than 18.

The mixed messages haven't only affected Up in Smoke.

FastLane Convenience Stores, which are owned by Warrenton Oil, are also still selling tobacco products to anyone 18 or older.

KOMU 8 News called a store on Tuesday, and the person who answered the phone said it was a corporate decision. KOMU 8 News reached out to Warrenton Oil but has not heard back.

However, some stores, including Dollar General, have already implemented the higher buying age.

Lee said he thinks the confusion could be solved if the different agencies talked to each other.

"It's a lack of communication," Lee said. "There’s so much confusion that could have all been solved if there had just been a little communication before this stuff was implemented."

The FDA tweeted it expects to publish a final update to its regulations within 180 days.