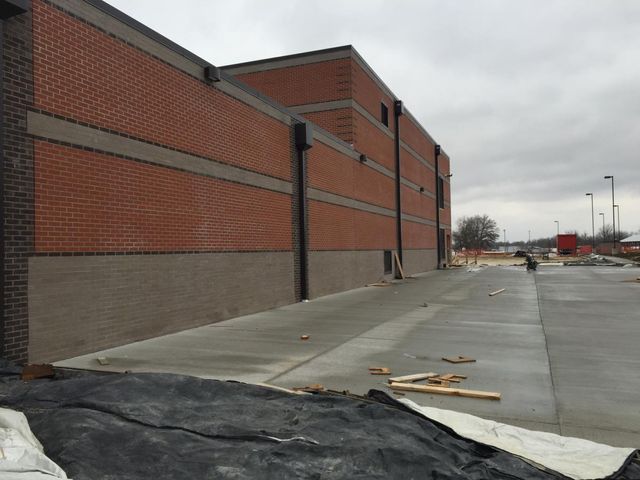 Safety plans for the Eldon School District will soon change after the completion of a new tornado safe room.

The new Early Learning Center and Tornado Safe Space is being built thanks to a grant from the Federal Emergency Management Agency (FEMA). It has been in the works since April 2013.

The grant paid for over $1 million of the $2.1 million project. The grant covered the cost of the construction of the "shell" of the building, while the rest of the money was raised by bonds and used to outfit the inside of the space.

"It meets all the FEMA guidelines for a tornado shelter," Superintendent Mark Davis said. "This concrete block, all of them are filled with concrete cores and it has rebar coming through it. It has five foot footings. It has a concrete deck on the roof, so this building is as solid as can be."

In the event of a tornado, students and staff at nearby Upper and South Elementary schools in Eldon will fill the space. If a tornado takes place after hours or on the weekend, the space is also open to members of the community.

"One of the regulations you have to have is an open space that can be completely open within five minutes," Davis said. "So when you talk about adding on classrooms or different spaces it's hard to have a space large enough to hold 1,200 people that's open enough."

In addition to providing a safe space, the concrete building will also double as a gym and classrooms.

"As a school district gym space is always critical and hard to find, especially like these cold, winter months we'd love to be able to have indoor recess," David said. "We have different sports after school. We have intramurals for our kids so this facility kind of fills that dual role, a good place for our kids to be active and healthy during the day and after school and then also a safe space in case of a tornado."

Boone County and Cole County both lack FEMA approved tornado shelters. However there is one located in Callaway County at the Holts Summit City Hall. Others in our viewing area include Linn Technical College and Mexico Jr. High.

The new space in Eldon should be open by the end of the month.