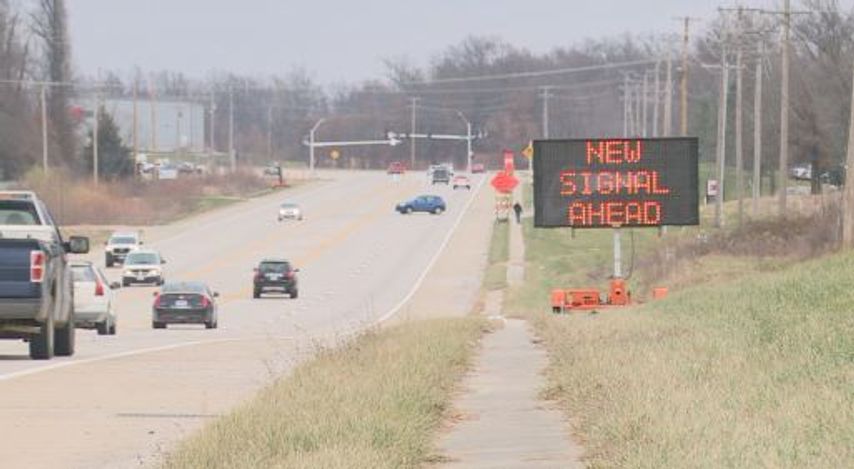 COLUMBIA - The new traffic signals at the Waco Road and Route B intersection will begin operation Tuesday morning.

The construction of new mast arm signals began on October 9, as part of the Waco and Route B Intersection Improvement Project. Other improvements to the intersection include raised islands, pedestrian crosswalks and restricted turning movements for the driveways closest to the intersection.

"It's a heavily used industrial corridor," Dalton said. "It's used by commuters to Hallsville, Centralia and other areas, and there are also a number of businesses already there."

Dalton said more businesses, like Aurora Dairy and Kraft/Heinz, are moving and expanding in the area, so traffic will only increase.

The City of Columbia and MoDOT are working together on the project and invested around $380,000 into the improvements from the 2015 Capitol Improvement Sales Tax.

"From 2011 to 2015 there were, I believe, eight crashes at that intersection, seven of them having injuries," he said.

Dalton said before the signal was constructed, drivers on Waco Road would have to try to drive across Route B to turn left, which is a wide road with a lot of big trucks. He said traffic didn't yield, so having a traffic light will benefit everyone.

To warn drivers of the change, MoDOT has placed message boards ahead of the new signals.

MoDOT Senior Traffic Studies Specialist John Schaefer said there will be permanent interactive signs that warn drivers of the signal ahead, and when the light is red. He said there will also be signs placed southbound, headed toward Columbia, because of the way the road curves.

"Most drivers are drivers of habit, and so when there's a new light that they're not expecting there's always worry that people aren't paying attention," Dalton said. "So, there's big boards, flashing signs, being put up to alert drivers."

He said there shouldn't be any additional traffic congestion with the new signal.