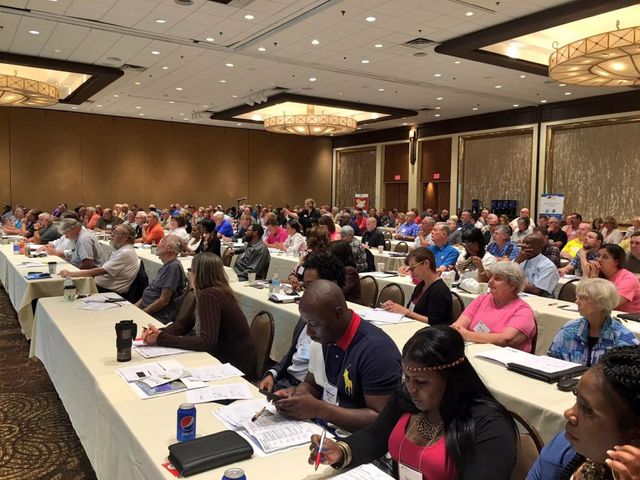 COLUMBIA - What comes naturally to career politicians might stump people who are in office for the first time.

Bwayne Smotherson, who recently became a council member in University City, said he needed to know more about things like ordinance resolutions, the purpose of city government and who does what in the government.

"That's what I was looking for," he said while attending the Missouri Municipal League's annual elected officials training conference Thursday afternoon.

The two-day event, running Thursday through Friday, had over 220 attendees on the first day.

Smotherson said, as soon as he learned about the event, he knew he would attend.

"I just thought that it was really important for me to become as involved as I could and understanding city government, so that I can actually improve my community, and get a better understanding, and have some answers for residents in University City," Smotherson said.

The conference is aimed at preparing and educating newly elected local officials on their roles and responsibilities in their communities.

The voluntary training, open to officials from across the state, is an "invaluable resource" for new officials Executive Director of the Missouri Municipal League, Dan Ross said.

"You may not understand what authority you have to make decisions, to spend money, hiring and firing, those kinds of things," Ross said.

Out of those in attendance the league estimates that over two-thirds were newly elected and the rest where returning veterans. While Ross said he is pleased to see so many new faces this year, he adds he is not surprised to see  many returning ones as well.

"The laws change. There's slight changes in the sunshine laws, there were changes in the municipal court fee laws, this year, so theres always something and people come back, because there so committed to their jobs," he said.

The fee for the event is $130 and topics covered include budgeting, sunshine laws, ethics, and teamwork with fellow board members.