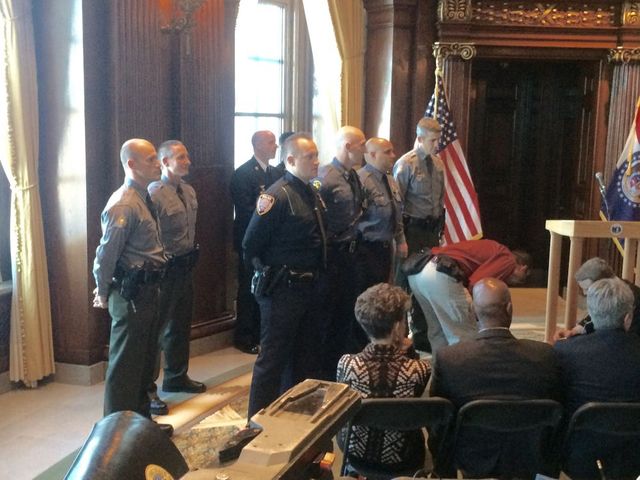 JEFFERSON CITY - Nine officers from around the state were awarded the Medal of Valor Wednesday for risking their lives to save others.

"I'm very grateful," said Officer Anthony Davis of the Manchester Police Department. "I feel like I was just doing my job that day, and it's what I got in law enforcement to do, is to help others."

On January 3, 2014, Davis was dispatched to a three-story apartment building. Since he arrived before the fire department, he ran into the building and saved people trapped inside.

"I heard the calls for help, and I want to say God's voice told me 'we got this'," Davis said. "I give glory to God. Through him, he's gotten me through a lot of things.

Each participant had their stories read to a crowd of family, friends and officials, before receiving their award from Gov. Jay Nixon.

"It takes a rare and courageous breed to wear the badge," the governor said.

He said the officers were the true definition of heroes, and thanked them for running to trouble, not away from it.

Nathan F. Box of the Missouri Department of Corrections

Michael Anthony Maupin of the Missouri Department of Conservation

John D. Wright of the Missouri Department of Conservation

Eric E. Abbott of the Missouri Department of Conservation