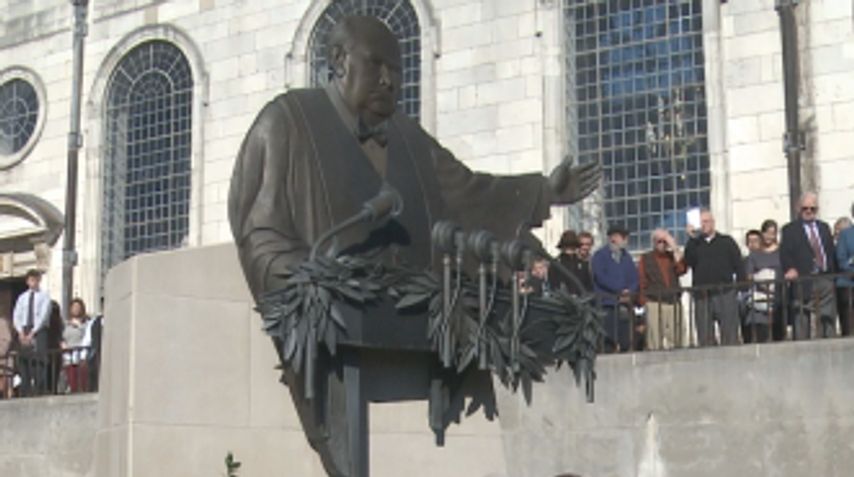 FULTON - Community members, politicians and dignitaries from around the state and the world gathered in Fulton Saturday to remember the late British Prime Minister Sir Winston Churchill, on the site where he delivered one of his most famous speeches.

Churchill died on January 24, 1965. To mark the 50th anniversary of his death, Churchill's granddaughter and great-grandson, along with British Ambassador Sir Peter Westmacott, Gov. Jay Nixon and Churchill admirers alike, gathered in the Church of St. Mary the Virgin, Aldermanbury on the Westminster College campus for a service modeled after Churchill's original funeral service in 1965.

The service included remarks from Nixon, who reflected on the diplomatic legacy of Winston Churchill, America's admiration for the British leader and Harry Truman's relationship with him.

Churchill's great grandson, Duncan Sandys, spoke on the emotion of the day and the family's separate gathering in England Saturday.

"His influence on events was incredible, as one British newspaper wrote, 'We are a free people because a man called Winston Churchill lived,'" Westmacott said.

Westmacott and Edwina Sandys, Churchill's granddaughter, laid a wreath at the statue of Churchill outside the church, and Sandys spoke a few words about her Grandfather's legacy. Sandys sculpted the "Breakthrough" sculpture, made of sections of the Berlin Wall, now situated on the Westminster College campus.

"It's very difficult sometimes to learn from looking back," Nixon said. "To take history and project it forward. I thought he was, as much as any world leader, able to do that. I think in these days of term limits and tweets and short moments, that ability to look back and put in context what you're doing today, I'd ask him on practical advice on how to do that."

"Winston Churchill had a remarkable capacity, because of his knowledge of history much like Harry Truman, to see the future in way that other people couldn't," said Dr. Jim Williams, director of the National Churchill Museum.

Relating the harsh realities of the day to modern challenges, Westmacott said Churchill's straightforward honesty should be a model for today's leaders and diplomats.

"He did not put his head in the sand like others did, when Nazi Germany was rearming in the 1930s," Westmacott said. "It's the honesty of the analysis and then it is the firmness of purpose with which he addressed those challenges."

"He was an iconic thought leader," Nixon said. "But for him, that Iron Curtain he so aptly named here would not have come down."