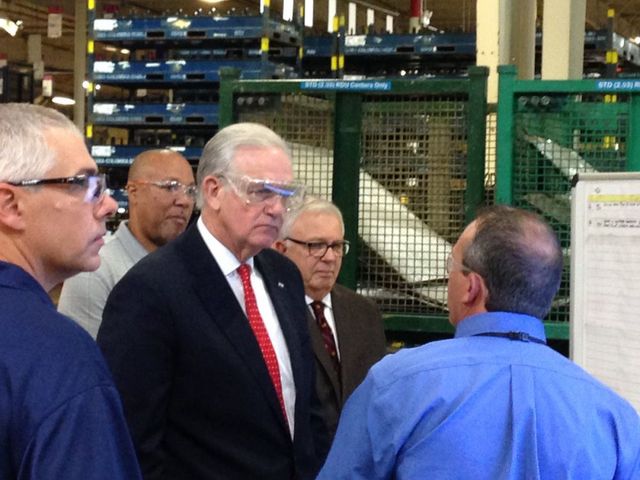 COLUMBIA – Governor Jay Nixon spoke to a crowd of attentive line-workers this morning at Dana Incorporated, a vehicle manufacturing plant in Columbia.

Today, Governor Nixon received the Motor Equipment Manufacturer’s (MEMA) State Leadership Award, given every year to a governor who puts a priority on job creation in the motor vehicle industry in his or her state. When Nixon took office in 2009, his first act as governor was to create an Automotive Jobs Task Force to make recommendations on creating new investments in Missouri. Since then, motor vehicle manufacturers and suppliers have invested more than $2 billion in Missouri, bringing the total number of motor vehicle-related jobs to 24,000.

Nixon said he thinks by the time he leaves office in 96 days, he will leave behind a stronger job market in Missouri than when he took office seven years ago.

“I’m very proud of the work we’ve done,” Nixon said. “The work I don’t think on economics is ever going to be done as quick as the world economy is changing, but I do think we have transformed ourselves to compete with anybody in the world with advanced manufacturing, anybody in the world.”

“Governor Nixon, we greatly appreciate him,” said Mark Holly, who started working at Dana Incorporated in 1987. “He helped reestablish the automotive industry in the state of Missouri, which brought some jobs back to us, and we really do appreciate that.”

In recent years, 64 automotive plant and part suppliers in Missouri have announced plans to expand. Dana Incorporated is one of them: the company said it plans to hire 135 new employees as a part of a $39 million expansion. Holly said he hopes Nixon’s successor picks off where he left off.

“Just keep it going. We want to keep growing,” he said.

Ann Wilson, the senior vice president of MEMA, said Nixon was selected for the award

"Specifically with Governor Nixon, we looked at work force training, and the incentive programs he's been able to do for advanced technology and advanced manufacturing," Wilson said. "In 2008-2009 when the governor took office, that was really the deepest, darkest times for the U.S. economy, but manufacturing and auto-manufacturing specifically. To be able to provide a stable foundation, but hen also an opportunity for growth... that is absolutely incredible."

Nixon has also been criticized for his role in Missouri's job growth, or lack thereof: In a June 2013 analysis by The Business Journals, which ranked 45 of the country's 50 governors by their job creation records (five had just been elected), Nixon was ranked number 39. The ranking was based on a comparison of the annual private sector growth rate in all 50 states using data from the U.S. Bureau of Labor Statistics.

Nixon is only the third governor to serve consecutive terms in Missouri's history.