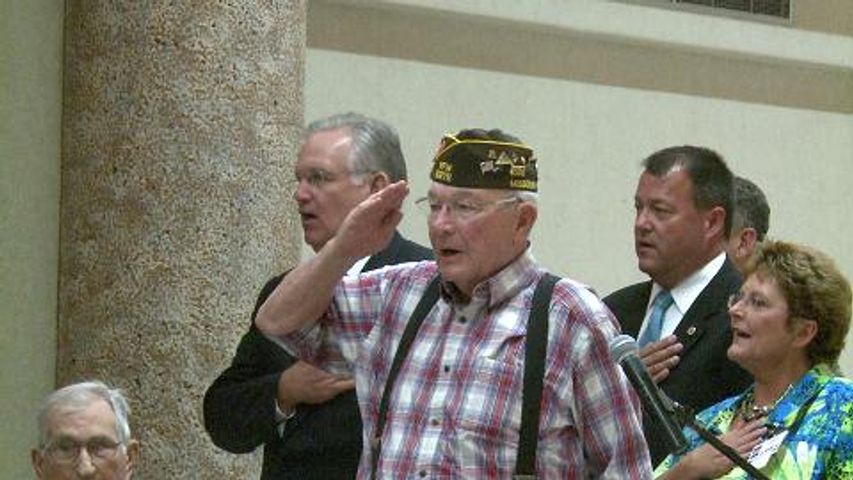 MEXICO - Governor Jay Nixon signed a bill Wednesday to create a fixed fund of $32 million to go each year from the Missouri Gaming Commission to the Veterans Commission Capital Improvement Trust Fund. The guaranteed money will help support the ongoing operations of Missouri veterans homes and cemeteries.

Scores of uniformed veterans and their families listened attentively in the cafeteria of Mexico's Veterans Home to Governor Nixon speak about the funds the seven veterans homes and 1,300 military veterans living in them will receive. Nixon said the long-awaited bill will help avoid a revenue shortfall in the upcoming years and will also allow home administrators to better prepare for future home replacements or repairs.

Dewey M. Riehn is the head of the National Legislative Committee of Veterans of Foreign Wars (VFW). He said the "pie in the sky dream" for he and his fellow veterans is the future ability to build four to five more homes in the state of Missouri to help those currently seeking aid.

While the bill is heavily dependent upon the success of Missouri casinos, Governor Nixon said he never hesitated to go through with the bill, regardless of its possible flaws.

"I was not dissuaded to move forward on this measure by the other pieces that were involved," Nixon said. "The casino has a track record of finding funds and getting these dedicated funds puts a specific funding source where it is sorely needed, to our veterans."