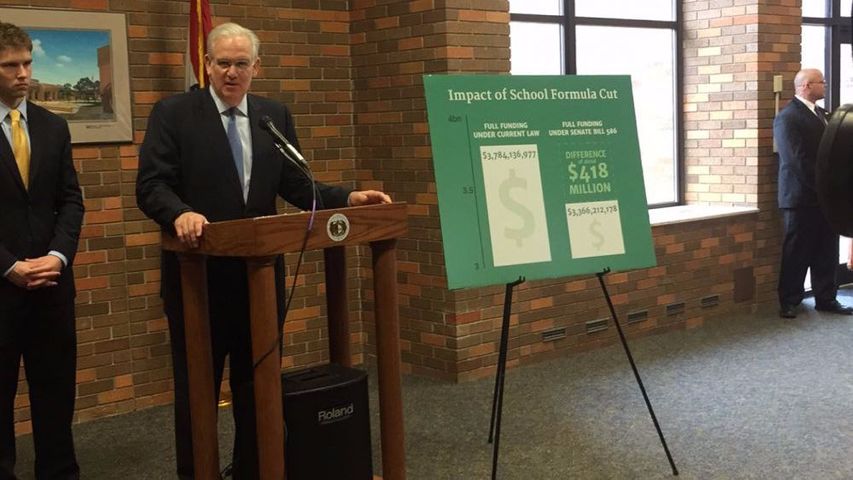 The bill is currently under consideration in the House, and Gov. Jay Nixon openly opposes it.

Nixon spoke to a group of students at Rock Bridge High School Friday about the funding issue.

A graph that the governor presented showed if the change were enacted, the difference in current target funding would be $418 million.

“I don’t think lowering the expectation for the state of Missouri, in essence passing a bill so that future governors and legislators can grade themselves on a curve for what ‘fully funded’ is, is good policy for the state,” Nixon said.

He also said the passing of the bill would allow for special interest tax breaks and put pressure on local governments to pass tax increases to support education in their communities.

Rep. Caleb Rowden, R-Columbia, thinks it is unfair for Nixon to say the Republican-majority is not prioritizing K-12 education.

“I think it’s important for us to remember that in the four years that I’ve been in the general assembly we’ve added over $300 million to the K-12 formula,” Rowden said.

He supports reassessing the current formula and making changes, and he acknowledges the hard part is still coming up with the funding.

“A vast majority of the general assembly, republicans and democrats, want to fully fund the formula, in whatever form that formula looks like,” Rowden said.

The bill would also allow charter schools to include preschoolers in their daily attendance numbers, increasing their funding.