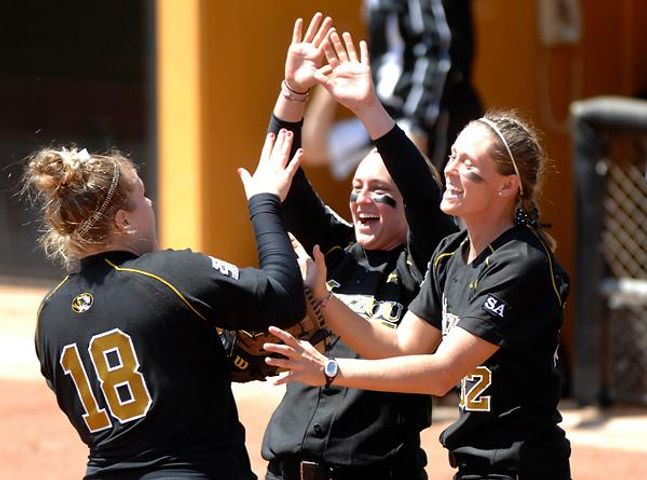 COLUMBIA, Mo. - The No. 9 Missouri softball squad closed out the non-conference portion of their regular season with a sweep over the Western Illinois Leathernecks on Wednesday, taking game one by a 7-2 score before winning 5-0 in the finale.

Redshirt sophomore Chelsea Thomas set the new school record for most strikeouts in a single season in the fourth inning of the second game. Her 287th career strikeout moved her passed Erin Kalka, who struck out 286 batters during the 2004 season. Sophomore Nicole Hudson was strong offensively, going 4-for-6 on the afternoon with three runs scored and an RBI. Rhea Taylor also added four hits in six at bats, stealing three bases on the day, scoring three runs and driving home a run as well.

Missouri went up early in game one with a run in the bottom of the first inning. Taylor led off with an infield single and swiped second base, and scored two batters later when Hudson hit a single to the gap in left-center field.

The third inning started just like the first did, with Taylor getting a base hit and stealing second to lead things off. She moved up to third on a groundout, while Hudson was hit by a pitch and then stole second base to put a pair of runners in scoring position. Taylor would score on a fielder's choice by Ashley Fleming, making it 2-0. Fleming hit a grounder to the first baseman, who threw home on the play but Taylor was able to slide under the tag. Hudson would come in to score on the next play, as Maddison Ruggeberg hit an RBI single threw the left side of the infield.

The Tigers blew it wide open in the fourth, scoring four times to go up 7-0. Catherine Lee got things going with a leadoff double, and Marla Schweisberger put two on with a base hit into right. Abby Vock plated both of them on a double, and she moved up to third on the throw. She would score when Taylor picked up her third hit of the game, a double off the glove of an outstretched first baseman. Later in the inning Ruggeberg hit a sacrifice fly, scoring Shana White, who ran for Taylor.

The Leathernecks added two unearned runs in the sixth inning, capitalizing on a pair of Tiger errors. Western Illinois loaded the bases with no one out following a leadoff error, a base hit and a bunt single. A walk drove in the first run of the game for WIU, while another error brought home the second run.

That's all they would get, however, as junior Kristin Nottelmann worked a quick 1-2-3 seventh inning, securing her 14th win of the season. Now 14-1, Nottelmann allowed just three hits, two runs - none earned - walked a pair and struck out seven. Taylor led the team with a 3-for-3 game, scoring twice with an RBI, while Hudson went 2-for-3 with a run and RBI. Lee picked up a pair of hits, while Vock drove in two.

Thomas pushed her record to 24-4 with her 11th complete game shutout of the season, as she struck out eight batters, walked zero and gave up just two hits. Her earned run average, still the best in the nation, was lowered to 0.70.

After trading two scoreless innings, Missouri finally broke through with a pair of runs in the bottom of the third. Taylor led off the inning with a perfect bunt single and followed by stealing her third base of the day. After moving to third on a ground out, she'd come in and score two batters later on a base hit by Ruggeberg. Princess Krebs grounded out on the next pitch, scoring Hudson, who walked earlier in the inning.

In the top of the fourth inning, Thomas struck out Beth Golitko, the Western Illinois leadoff hitter, to set the new strikeout mark. She'd go on to strike out the side in order in the inning.

Doubles by Hudson and Krebs in the fifth inning brought in another run to make it 4-0, while Krebs would score on a base hit by Megan Christopher, pushing their lead to 5-0. Thomas set the next six Leathernecks down in order to finish off the game.

Missouri hosts a pivotal series this weekend against No. 3 Texas with the fate of the Big 12 championship on the line. Game one begins on Saturday at 2 p.m. CT, with Sunday's finale at Noon CT. Sunday's game will air live nationally on ESPN, with Cara Capuano and Jessica Mendoza on the call. Fans are encouraged to arrive to each game early, as record attendance numbers are expected. The Tiger softball team also asks all fans to wear black all weekend long, as they hope to Black Out University Field.