No Deal on Medicaid After Nixon Meets With Senate Republicans 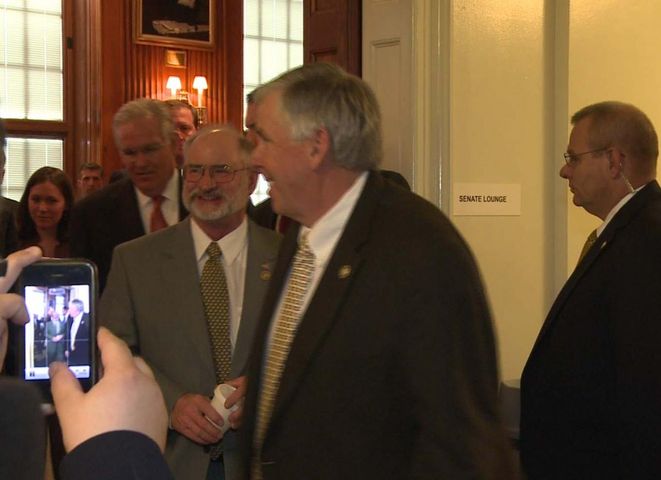 JEFFERSON CITY - Gov. Jay Nixon called his discussion of Medicaid with Senate Republicans Tuesday cordial and thoughtful but neither side conceded any ground.

Nixon told reporters he views the current debate over expanding Medicaid as "a unique opportunity to improve the state's healthcare system" but did not give any specifics about Tuesday morning's meeting. He said it was imperative the state expand Medicaid as called for by new federal regulations to capitalize on federal promises to cover 100 percent of Medicaid costs for the next three years.

"We had a really substantive, thoughtful discussion," he said.

Senate President Pro Tem Tom Dempsey, R-St. Charles, told reporters there was no agreement to expand Medicaid but the governor answered the questions Republicans asked. He said his caucus appreciated the dialogue with the governor and would continue to discuss the issue among themselves.

"Right now, I just want to have the governor's comments, allow those to sink in to the different members of my caucus," Dempsey said.

Current Republican-backed Medicaid proposals call for expanding the program to anyone up to 100 percent of the federal poverty level but not to 138 percent as required by the new federal healthcare law. Republicans have also called for involving the private sector in Medicaid plans. Both actions would require waivers from the U.S. Department of Health and Human Services. GOP-led committees in both chambers have already voted down Democratic proposals to expand Medicaid fully. In addition, the budget passed by the Missouri House of Representatives last month does not include the funding for Medicaid expansion Nixon had called for.

Nixon said he would discuss the state's Medicaid plans with Secretary of Health and Human Services Kathleen Sebelius on Tuesday afternoon after meeting with Senate Democrats.