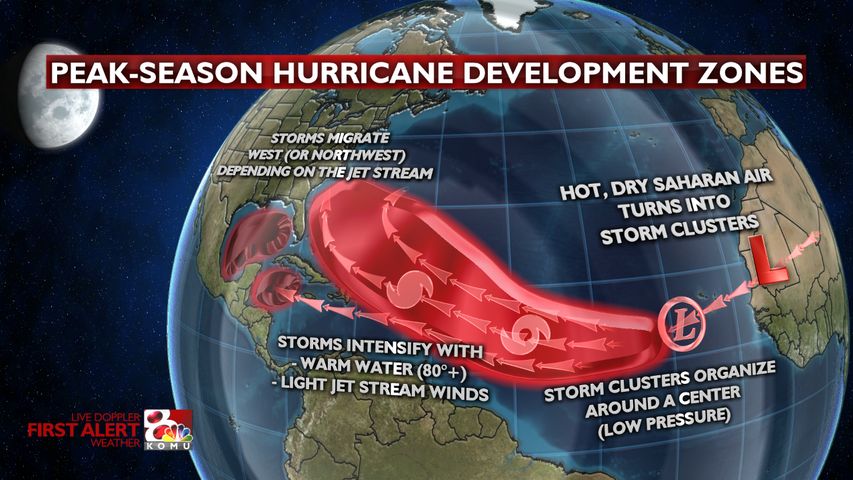 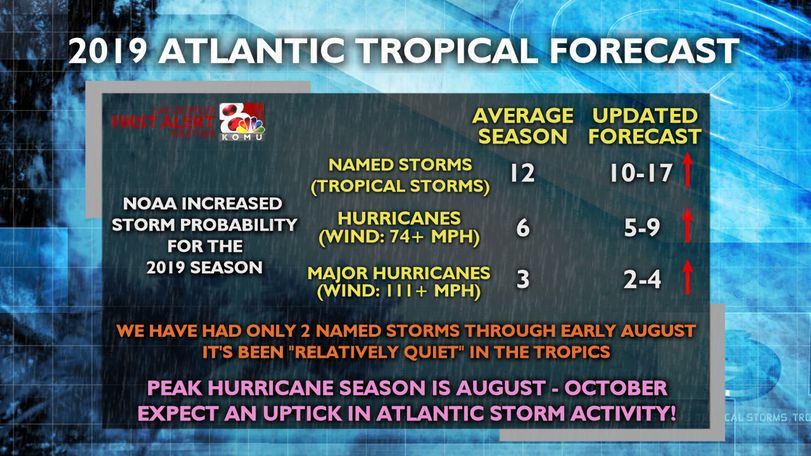 MIAMI, Fla. - The National Hurricane Center, a division of the National Weather Service, has increased the likelihood of “above-normal” activity in the Atlantic Basin for the remainder of the 2019 hurricane season.

Their forecast update increased the probability of “above-normal” activity from 30% to 45%, including an increase in the amount of named storms (i.e. tropical storms) from 9-15, to 10-17 storms.

A normal Atlantic hurricane season consists of 12 named storms, 6 of which strengthen into hurricanes, 3 of those hurricanes reaching category 3 strength on the Saffir-Simpson scale.

Up until the first week of August, there have only been three storms to reach tropical depression strength or greater. Two of those storms were named.

Atmospheric conditions have not been conducive for tropical development for majority of the 2019 season, which began June 1. This is expected to change, possibly quickly and abruptly.

Statistically, most hurricanes develop from August through October, not May through July..

On May 23, the National Hurricane Center issued its 2019 Atlantic hurricane forecast, predicting a “near-normal” amount of tropical cyclone activity this year due to a few key things:

On August 8, the National Hurricane Center issued its mid-season update, predicting an increase in overall tropical cyclone activity for the remainder of the 2019 season.

The reason: the forecasted end of the current El Nino pattern which lead to significant rains over the United States this past winter and spring. This has also been responsible for the lack of overall activity in the Atlantic Ocean and Caribbean.

Pictured in this article is a diagram illustrating typical development of tropical waves in ideal conditions, which originate from Africa’s Sahara desert.

Warm, dry areas of low pressure will organize over the warm waters of the Atlantic, creating thunderstorms. Assuming atmospheric conditions are perfect, the storm system will continue to organize and intensify until it turns into a counter-clockwise rotating cyclone, or hurricane if winds remain sustained at 74 MPH, or greater.

With some limiting factors now trending out of the long-range pattern, an uptick in tropical cyclone activity is possible leading into the peak months of the season.