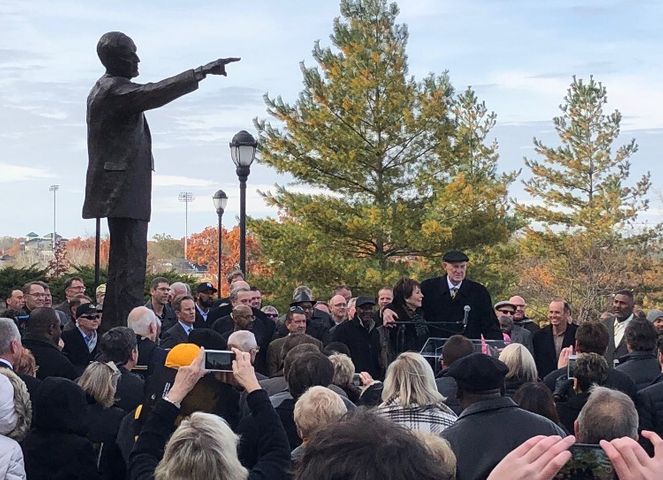 COLUMBIA- The University of Missouri unveiled a statue of Norm Stewart, MU alum and longtime basketball coach on Friday afternoon.

Family, friends and former teammates surrounded Stewart during the ceremony.

"He was a tremendous person in my life and I owe everything to him," Smith said. "When you are 17 or 18 years old you don't realize but when you get up there in age and look back you realize coach made it all worth it to come here."

Stewart spoke briefly about how important the statue was to him.

"I want friends and family to come down and look at this statue and say I helped build this because all of you did," Stewart said.

MU Athletic Director Jim Sterk proposed the statue to the board of curators and it was approved at the end of October. The project cost $196,000 and was funded by private donations.

"Having more than 20 former athletes step up and helped to make this a reality for coach," Sterk said.

The statue is of Stewart pointing to his former players, something Sterk said was one of his main poses.

"The statue captures coach Stewart's tenacious personality," Sterk said. "The pose is ingrained in the mind of every former player and coaches mind."

Stewart played basketball for the Tigers in the 1950’s and won 634 games during his 32-year stint as head coach. During his tenure as coach the team won six conference tournament championships and reached the NCAA tournament 16 times.

Stewart has the most wins in Missouri Tigers basketball history. The court inside of Mizzou Arena is already named in Stewart’s honor.

The Tigers begin the basketball season Friday night at Mizzou Arena against the Iowa State Cyclones.