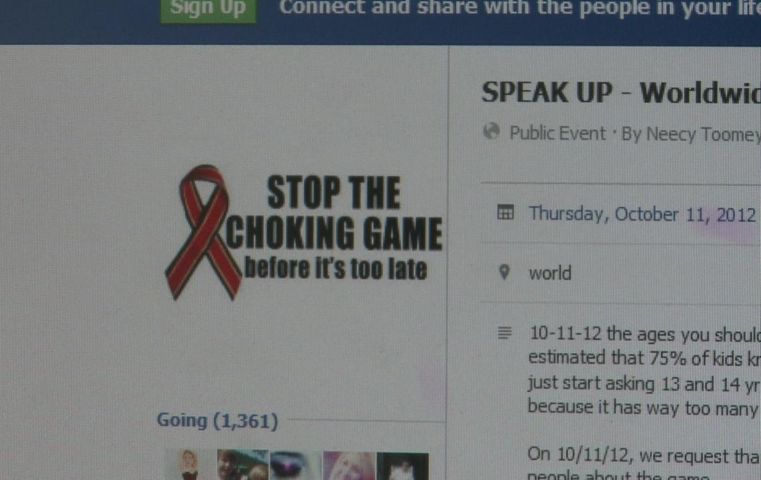 COLUMBIA - Neecy Jarman said when she came home from work one night a little over a year ago, and found her son Josh dead, she knew it wasn't a suicide.

She said that after doing some research on her son's Facebook, she had learned that her son had been playing "the choking game " with some of his friends. But she also said Facebook has been her greatest ally in connecting with other parents and foundations to make a difference.

"We've all joined together to unite and make it one day , one loud voice, instead of a lot of little voices," Jarman said.

October 11th, 2012 has been declared Worldwide Choking Game Awareness Day. The date, 10-11-12 is said to represent the age range during which children most often pick up and participate in this game.

To prevent this choking game from becoming any more popular than it already is, various parents and foundations have made web sites and Facebook pages as well as hold school assemblies, national conferences to educate families about the risks of this game.

Some of the foundations participating in the worldwide day of awarness including Games Adolescents Shouldn't Play (GASP), Erik's Cause and the DB Foundation.

Jarman said she hopes to create an awareness of the dangers in this game for both parents and children, and hopes that this education leads to an end of the choking game worldwide. However, she said that she has seen some resistance from Columbia Public Schools about getting education programs instituted and discussed in the district.

"They are afraid that children that do not know about the choking game will go home and want to explore and try it out. But most of the children I have asked about it seemed to know about it already," Jarman said.

Although national statistics of deaths related to the choking game are scarce, parents are said to have self-reported more than 600 deaths attributed to this in the last six years.