October 2019: Third snowiest and sixteenth coldest in Columbia despite record warmth early on 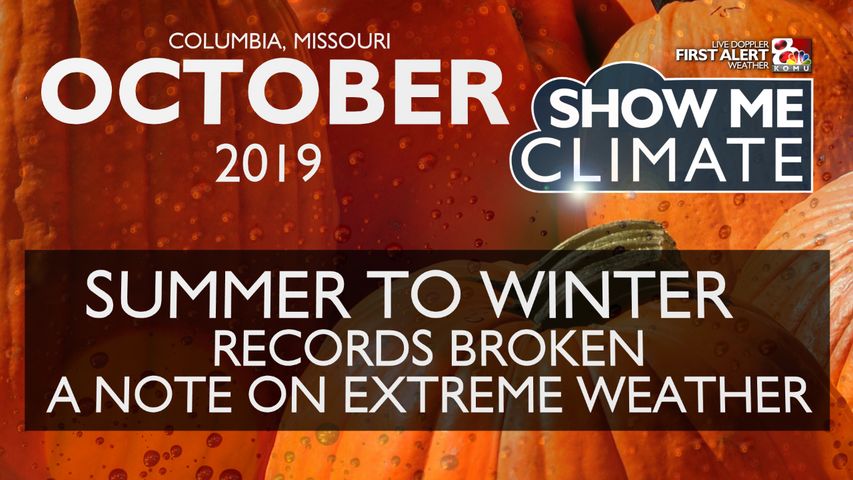 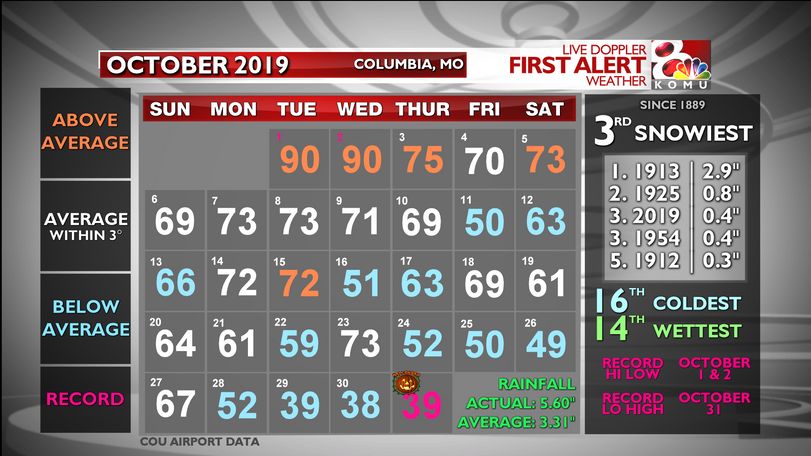 COLUMBIA - Do you remember September 2019? It was the hottest month mid-Missouri has recorded in the past 130 years. That warmth held over into October for a few days. October 1 and 2 both recorded record warmth at night, with the warmest low temperatures on set for both of those dates. The warm stretch wouldn't last long after that, however.

Summer quite literally continued through September into October. Most folks were ready for Fall conditions, tree leaves to change, sweater and jacket weather. Well, all of those things came, but it wasn't quite as many had hoped. It got cold. Fast. We were just telling folks to break out the fall jackets and then had to say, scratch that, dig up the winter coats!

Columbia has just as many seasonally average days in October as it did below average days, thirteen each. While the first frost came on the 11th and 12th of the month, a deep freeze didn't arrive until the last two days of the month when temps dropped into the 20s.

Halloween broke records all on its own. The high temperature only reached 39º, tying 1993 and 1951 as the coldest high temperature on record for that date. Morning snowfall also totaled 0.4", breaking the previous 0.3" daily record from 1912. This would also be the only snowfall of the month.

A NOTE ON EXTREME WEATHER

I find it important to note that our climate isn't only changing in the warm months. In fact, it is almost more important and more evident in the colder months. So, the fact that we just had the 16th coldest October in 130 years of records doesn't disprove climate change nor global warming (which are not the same thing).

Look instead at the fact that we went from the 1st hottest September to the 16th coldest October. We flipped from a summer September to a winter October. We skipped autumn conditions for the most part. It is this type of extreme weather pattern that is becoming more frequent due to climate change.

Moreover, just last year in 2018 we went from the 1st coldest April on record for the state of Missouri to the 1st hottest May. We went from a winter April to a summer May. We skipped spring completely and in a very extreme way, something the Missouri State Climatologist agrees with undoubtedly.

If people try to tell you that just because it is cold, or there is snow on the ground, that "global warming was supposed to mean we wouldn't see this anymore, so it's fake"...do not pay any attention. Those are lies from deniers who refuse to see the truth of our changing climate. Also note that I haven't talked at all in this article about it being human-caused climate change. Because honestly, even for those who think it is natural for our climate to be changing faster than ever before in human history, when it comes down to it, regardless of where blame is placed, the climate IS changing. We need to start understanding better what is changing, how rapidly, what those effects are and what they will be. The climate is changing rapidly whether you believe it is human-caused or not. That is an undeniable fact. Let's talk about those changes.

UPDATE: MAY 2018 is the hottest on record