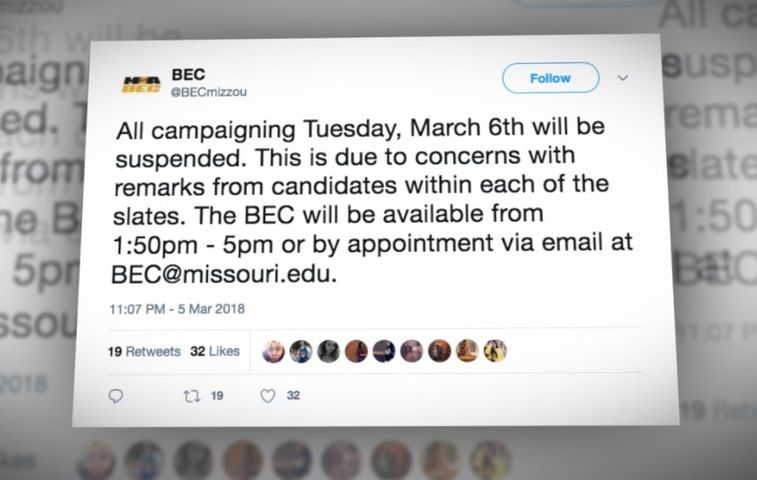 COLUMBIA - A story that would typically be about a student election has served as an example of an even bigger lesson. Monday night, KCOU's Brett Stover, found offensive old tweets from current Missouri Students Association presidential candidates and slates. This lead one candidate to drop out of the race.

Stover re-posted tweets from Blaine Thomas from the BlaineandChad slate, Claire Jacobs from the JacobsandCarter slate and Caius Gillen from the JuliaandCauis slate that all exhibited offensive language.

On Tuesday night both Thomas, Jacobs and Gillen withdrew their candidacies for MSA President and Vice President.

The tweets used terms like a slur referring to a gay person, the n-word and other offensive terminology.

Former MSA President Sean Earl said, "It is truly disappointing to see potential leaders of our student body have a history of insensitive and racist comments. There has been an immense amount of progress over the last several years to make MU a more diverse and inclusive campus, and this work must not be undone by ignorant tweets made by candidates. I trust students and MSA leadership will hold candidates accountable and continue to push our university forward."

MSA Board of Elections Commissioner Chair Joseph Sell said,  “As of right now the election is continuing as it is.These comments fall out of the statute of limitation, so it’s not really much course of action that can be taken because these were so long before the election started.”

Sell said he temporarily suspended the campaign today so he could " look into the tweets, look at all of the governing documents, the election handbook and university rules and regulations to make sure we took the right course of action regarding the comments made by the candidates.”

The campaign will resume Wednesday.

“It’s really important to remember that when you’re putting something out on social media, if it’s Twitter if it’s Facebook, you’re publishing it to the internet. You may not necessarily think so, but when you do that you’re creating an online archive that’s going to live forever,” Simons said. “The internet has a very long memory.”

Simons said old tweets have the potential to harm someone's credibility. She referenced Cam Newton and Jourdan Rodrigue as another example of older tweets resurfacing and doing damage. Newton was accused of making a sexist comment to reporter Rodrigue. She had a lot of people on her side supporting her after the incident, but then some of her older racist tweets resurfaced and damaged the momentum she'd built up.

Sell said no punishment will come out of this incident.

Simons advised the students to, “Own it. You did it. You said it. Explain where you were coming from at the time. If you’re looking to represent people or for the support of people for whatever that might be, you need to be authentic,” Simons said.

Earl provided his advice as well.

"I would advise the candidates to apologize to the Mizzou community and make things right. If they feel they can not dutifully represent the vast student population at Mizzou, then it might be best to step aside and let others lead," Earl said.