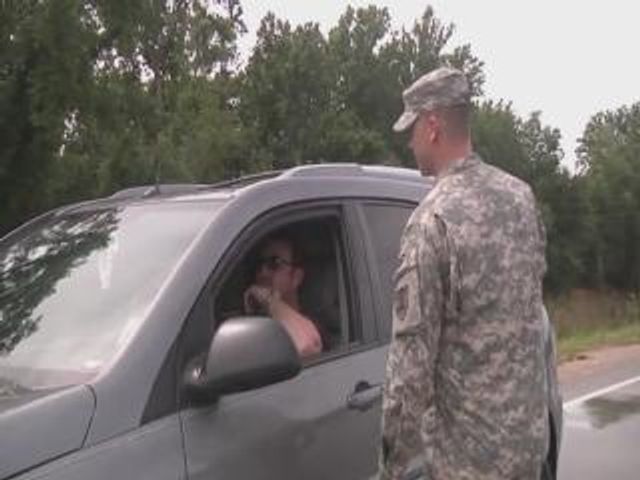 COLUMBIA - Members of the Missouri National Guard say they have no trouble leaving their day jobs behind during disasters like the recent flooding.

"Our soldiers are ready to go at a minute's notice because we just have that mentality," Captain Sandy Stover said. "We are the modern day minute men."

Guard members are every day citizens, she said. "They are anything from regular policemen in their day jobs, to bankers, to small business owners, and everything in between."

Stover is a career specialist at University of Missouri's Trulaske College of Business. On a regular day, she leads professional development workshops and helps students find internships.

But when disaster strikes in Missouri, she may be called to serve. That happened when Governor Jay Nixon mobilized military policeman to help local authorities with the flooding in southern Missouri.

Stover, a public affairs officer for the Guard, assisted the media covering the story.

She said leaving her job at a moment's notice is something she has no problem doing.

Colonel John Findley said even though the turnaround time is quick, authorities take many steps before troops can be deployed.

The governor must first declare a state of emergency before local requests for help are sent to the state emergency operation center in Jefferson City.

"We go through a decision process to decide what unit we're going to pick, and then we notify that unit, and they start calling their troops up for duty," Findley said.

Findley, who works from Guard headquarters, said his mindset is the same as those deploying.

"National Guard loves supporting their neighbors," he said. "I mean, that's why we signed up for it. They just jump in there."

The Missouri Guard soldiers and airmen go through initial military training to form a foundation of what to do when called upon for help.

"We go through Army and Air Force training just like our active duty components," Stover said.

That training ensures soldiers are physically prepared for duty. Stover said she stays mentally prepared as well, by keeping bags packed and ready for deployment.

There is one thing she double checks before leaving.

"I always make sure I have my cords to keep my phone charged up," Stover said.