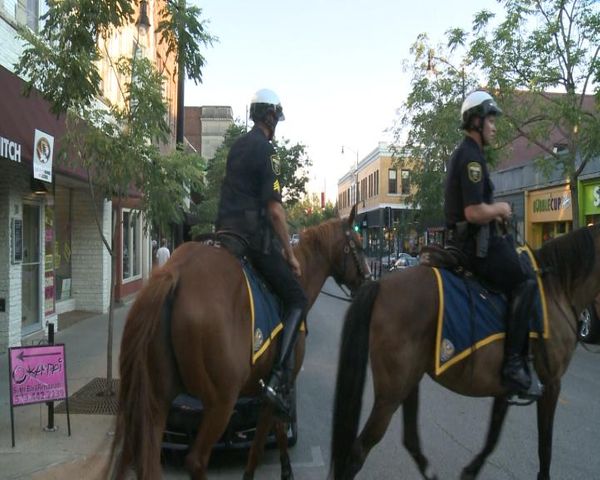 COLUMBIA - Members of the Columbia Police Department Mounted Team aren't seen trotting through the city very often. The team may not be seen at all, if it weren't for the monetary contributions and personal time of individual officers.

"At my home, we keep four of the five horses used for the Mounted Team," said CPD public relations officer Sergeant Joe Bernhard. "The department doesn't have the resources or the man power to have its own horses, so we are personally responsible for the care of our own horses 24 hours a day."

Bernhard is often seen behind a desk with bright lights shining in his face and a microphone attached to his collar. But he is also the supervisor of the Mounted Team. He cares for his personal horses, as well of those used for the Mounted Team, which costs him money out of pocket.

The department reimburses officers up to $1,050 a year for the care of each horse, which Bernhard said is only about a third of the actual expenses.

"If the department owned the horses and had to have the facilities," Bernhard said, "it would be a multimillion dollar project."

With the way the program currently works, the department spends about $5,000 a year, which roughly translates into $100 a week.

Bernhard said the horses are predominantly used for public relations efforts at events.

Horses offer an advantage over foot patrol officers because they are approachable, Bernhard said. "People see the horses and they want to stop and talk to you. They want to pet the horses."

The Mounted Team began in 2005 and the horses go through extensive training to become desensitized to crowds, chaos and possible violence.

Karen Grindler with Cedar Creek Therapeutic Riding center said the training is a positive aspect for the horses.

"They know what they're doing and it helps them become more well-rounded animals. So yeah, I think it's a great tool."

The next time the team is in action is Friday at Summer Fest on 9th street.