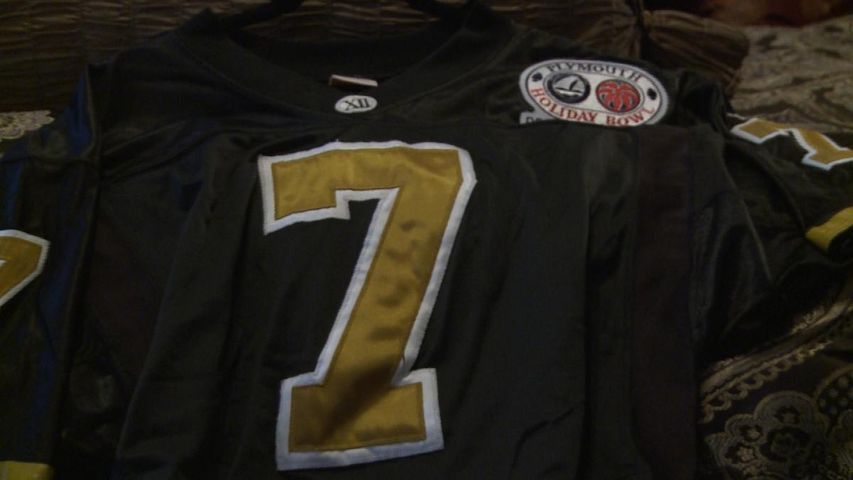 DALLAS - Thousands of people will be wearing their team's colors Friday night when the 78th AT&T Cotton Bowl kicks of at AT&T Stadium.

Ryan Rimmer, a graduate of the University of Missouri, will be wearing a special Mizzou jersey.

"I guess one of the things that's probably gooing to be the coolest about it is the fact that I may be the only person in the entire stadium that's wearing a 1997 Holiday Bowl game worn jersey," Rimmer said.

Rimmer's fraternity brother and former roommate walked-on to the Mizzou football team in 1997.

Greg Mitchell was a running back from a small town in Nebraska who dreamed of playing Division-I football.

"He was just happy to be there," Mitchell's father Glen Mitchell said. "Basically he accomplished a goal that everyone else thought was unattainable by just walking out onto the field in a uniform."

Greg Mitchell wore a uniform on the sidelines, but never played in a game for the Tigers. During his time on the team, Mitchell went to the 1997 Holiday Bowl and the 1998 Insight.com Bowl.

"His joy and excitement and energy would always make you feel good about whatever it was you were doing," Mitchell's former teammate Jamie Scholten said.

"That class in 1997, it was the first bowl we went to in fourteen years at Mizzou," Mizzou Associate Head Coach Andy Hill said. "And so we always look back as a special team and those guys were certainly part of it."

Rimmer and Mitchell stayed in touch after college while living in different states.

"He had moved to Arizona to go to pilot school. He was in training to fly helicopters," Glen Mitchell said. "And what his career goal was to fly medical helicopters."

In 2008, someone murdered Mitchell at his home in Arizona. He was shot five times. Mitchell's friend was also killed.

"I was pretty shocked. You know, I couldn't see how that was possible," Glen Mitchell said.

"It's always hard trying to deal with someone passing that you're close to," Rimmer said. "Whether it's a family member or friend, but not being close in proximity to that person and having not seen them for a while prior to that, that's the part that was the hardest, not being able to say goodbye."

The murder of Greg Mitchell led Rimmer to getting in touch with Glen Mitchell.

"I had told him, I said, that you know, while I have pictures and things like that to be able to remember him by, I wanted to be able to have something that meant a little bit more than just a photograph," Rimmer said.

Rimmer was shocked to find a package on his porch one afternoon in November from Glen Mitchell. What he found was Greg's 1997 Holiday Bowl jersey.

Rimmer will wear the jersey to the game Friday night. It'll be the first time he's ever tried the jersey on.

"I do think it'll be an experience that I probably have never felt before," Rimmer said. "I do expect it to be pretty awesome."

Many fans will create new memories from this year's Cotton Bowl, but Ryan Rimmer will remember the old ones.