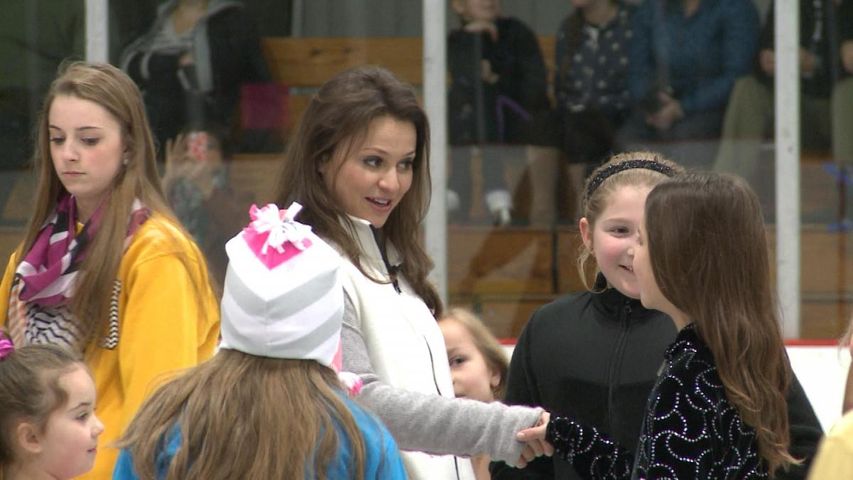 Cohen won a silver medal for figure skating at the 2006 Winter Olympics in Torino, Italy. She is also the 2003 Grand Prix Final Champion, 2006 US Champion and a three-time world champion medalist.

Cohen led group sessions with beginners and advanced ice skaters. She said working with young skaters is something close to her heart.

"I really enjoy being a mentor in figure skating and I try to be a good role model and give my skating tips and paroles of wisdom, you know having been in the sport for so long," Cohen said. "It's just really special because the sport really continues to give back and the lessons I learned in skating, in sport, in competition serve me in other things in my life."

Cohen's visit is part of the "Try it, Like it, Buy it" program organized by Edge Wise Skate and Dance. The program allows ice skaters enrolled in parks and recreation lessons at Washington Park Ice Arena to rent Sasha Cohen signature ice skates for 10 dollars during six weeks of lessons. The skater can then return their skates or purchase them for an additional 40 dollars.

Stephanie Burkett Brizendine is the owner of Edge Wise Skate and Dance in Jefferson City. She said the program has encouraged kids to begin skating and stick with the sport.

"It's real important to Sasha, and me as a shop owner, that kids have the ability and are introduced to the sport, and a lot of times people feel that because it is equipment driven that it's not accessible to them," said Burkett Brizendine. "You need proper equipment and so that is why I was so passionate about taking it down to the very introductory level kids so that they can have some success with the sport."

Cohen signed autographs at the Miller Performing Arts Center from 5:00 p.m. through 8:00 p.m. Saturday night. Burkett Brizendine said the "Try it, Like it, Buy it," program is still available to anyone enrolled in skating lessons through Jefferson City Parks and Recreation.