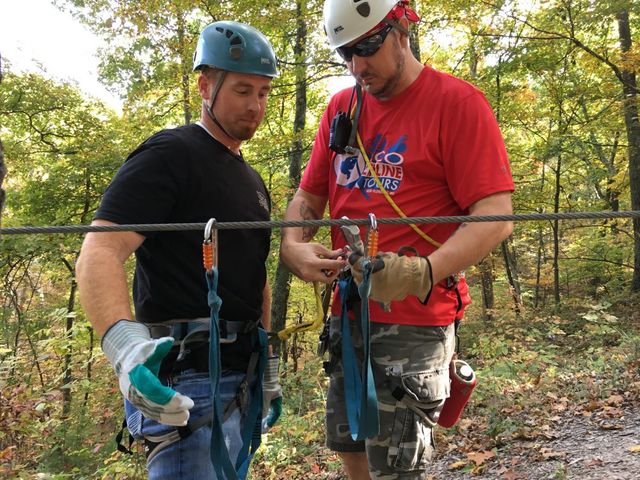 NEW FLORENCE - The sport and adventure of ziplining is taking off and soaring across the country and in mid-Missouri at Eco Zipline Tours.

"The first few times you get this little flip in your stomach. You get used to it after awhile, but when you jump off, and you are pretty high in the air, it's pretty neat," Rob Riffle said, who zip lined at Eco Zipline Tours.

However, injuries are also on the rise.

Owner of Eco Zipline Tours Mike Seper said, "Ziplining is a lot of fun, so the industry is growing very quickly, and the people that are operating these are inexperienced. So, with that, comes the risk that somebody would get hurt, which is a bad reflection on the industry as a whole."

There was a 56-percent rise in emergency room visits between 2009 and 2012 due to zipline accidents.

A study by Tracy Mehan with the Nationwide Children's Hospital in Columbus, Ohio found 16,850 people have gone to the emergency room since 1997 due to injuries from zip lines.

Seper and Eco Zipline Tours decided to help change that.

"With our safety procedures that we do out here, we have a built in break system that I designed. They never have to reach up onto the line. All the breaking system is built into the pulley, so they just pull down on a strap to be able to slow down."

"We want to keep everyone safe, and that is what our breaking procedure is all about," Seper said.

Other zip line courses across the country use different methods. Some courses have riders where a glove that they use as a friction mechanism to grab onto the line to slow them down while others use a spring or stop at the end of the line to stop the rider. Seper says this results in a jerking of the rider leading to whiplash effects and other risks of injuries.

"Other places you have to reach up with the zipline cable with a glove break, and that is what slows you down. That is not a safe procedure, because you are grabbing up by a moving mechanism."

Another rider at Eco Zipline Tours said he noticed he felt safer during the experience.

"I was one of the biggest guys on the group, and it definitely slowed me down," James Stewart said. "The course was awesome. We had a good group. The guides were good. We had a great time."

In addition to not having riders have their hands near the zipline or crashing into a stopping block or spring, Seper plans to use virtual reality to help keep riders safe.

"With this new virtual reality aspect is a neat aspect that they can go home and share their experience with everybody in full 360, but it's also a way to keep everybody safe," Seper said.

Just like an official can do in football, Seper and his staff can use the footage from the virtual reality cameras to see in a full, 360-degree view what went wrong if an accident were to occur.

Seper says he plans to have the virtual reality cameras added to all the lines next year in hopes of making each zip that much safer.