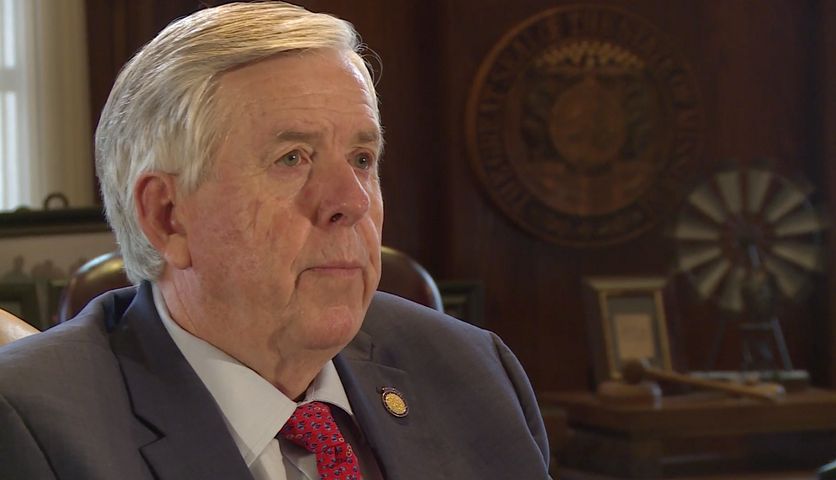 Gov. Parson talked about his decision to reopen the state on May 4. He said all of his decisions dealing with the virus have been driven by data.

He also discussed enforcement of social distancing, the state's plans for testing for COVID-19 and whether they have enough tests to do it.

Watch the interview above for his answers or read them below.

Q: How did the state decide on May 4 as the day to reopen?

“We built a model in Missouri several weeks ago...We really put a team together, a fusion team together, we call a fusion cell, to be able to get Missouri data. What is the scientific data here? What is the hospital utilization like? How many ICU beds do we have? And we started putting those factors in and how do we really know what a hot spot is, who are really the people that we need to target. So, once we had that information, we felt much more comfortable about opening up the state to realize we're much more prepared to handling this than where we were frankly, 30 days ago.”

Q: Part of your guidelines for reopening are social distancing and limiting the number of people inside for certain business sizes, how will you enforce that?

Q: Do you think it is realistic to think people will do that on their own?

"I do. I think you see that when we asked people to stay at home early on, people stayed at home. I mean, you've seen 40% reduction in traffic in the state people doing that...I don't think there's a person out there in Missouri right now that doesn't understand what this virus is, what it is we're dealing with and we're going to take some precautions to it. I just believe majority people will."

Q: What are the state's plans for expanding testing? And does the state have enough tests to do it?

"I believe we do. The capacity that we're going to have in the next several days, in the weeks to come are going to be much larger numbers than we've ever had before. We're even seeing a decline in testing now of people wanting to be tested."

"So, we're now actually expanding what you can be tested for. The other thing, we're going to do random testing across the state, really figuring out patterns of who's had the coronavirus, who's maybe had it before, who's got it now and to really figure out some real information for the state of Missouri...But, I think we're right now prepared to go in at any point anywhere in the state and be able to take to a hotspot, whether that's a nursing home, whether that's a processing plant, or St. Louis region itself, to put the resources in there to give them the ability to test and want to take care of these situations before we do have a serious outbreak.”

Q: So, there's no concern of a shortage of those swab kits?

"Right now, I don't think so. I mean, let me just say that we're always trying to look for more material. I mean, we don't feel like we've got enough stockpile in place for what we would like to have in future. But, I think you see every day that PPE supplies and gear are getting more plentiful in the supply lines for people to use it."

Q: What do you think that the state could have done better or could do better in the future?

"I think one of the first things that comes to mind is don't be dependent on other companies from outside the state. And, definitely don't be dependent on other countries. Because we see how devastating that was for us and how out of touch we were with what we really needed. So, the one thing I do know moving forward...I want my own businesses in the state of Missouri to make PPE product as much as we can provide our hospitals, our medical staff."

Q: What is the state doing to ensure that meat processing plants follow the CDC and OSHA guidelines to protect workers from COVID-19?

"Yeah, we're working on that every day...But we're in constant contact with those producers and those processors across the state. Again, we know that's a hot spot area that we got to be careful with there. So one, we know we have the ability now to go in there and test if we need to test. Two, to make recommendations. If these employees are less than six feet apart, they're going to have to wear some sort of safety, whether that be a mask, whether that be PPE of some sort. That's going to be up to the companies to make sure that employees are safe."

Q: The state has a seen a record number of people file for unemployment. We've heard from people who say they filed weeks ago and have yet to receive their payments. Why is it taking so long?

"I think one, just overwhelming the system. We have about 400,000, over 400,000 people now that have filed for unemployment claims. Those are just record numbers early on. We were fortunate enough to be able to stay up compared to most other states. A lot of the states totally crashed their systems and everything. And, we brought people in. I think we brought 100 extra people in. We were going 24 hours a day, seven days a week and it was just flat being overwhelmed. That's what it was. But I think as of today, if I remember right, I think well over half of those claims are being paid, in the process of that. So, I mean, we're doing the best we can for what we have."

Q: If could say anything to citizens of Missouri that you would want them to know from their governor, what would you say?