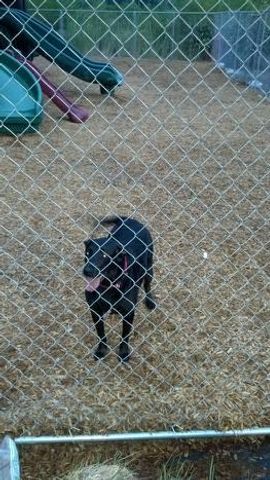 COLUMBIA - Facebook users are taking advantage of the social network's reach to help reunite lost dogs with their owners. A lab named Lucy is now back home, thanks in part to a post on the KOMU 8 News Facebook page.

The dog's saga began when her owners let her outside one recent weekend while the family's children were settling down for the night.

"We let her outside like we always do before we got ready for bed and she was outside running around," Allison DiBlasi said.

When DiBlasi went outside to call Lucy in, the dog was not there.

"I looked around and she wasn't in the yard. We realized she had gotten out through a hole in the fence," DiBlasi said. "I was terrified she got onto Grindstone and got hit by a car or something."

Sometime in the next 12 hours, someone took Lucy to The Crossing church. That's when parishioner Afton Pratt got involved.

"A concerned citizen dropped the dog off at The Crossing during one of our church groups," Pratt said. "When I was getting ready to leave, nobody had picked the dog up. We had put her in a fence at the church and I went home and got a picture of the dog."

Pratt posted that picture to the KOMU 8 News Facebook page, and it was there she first interacted with the public about the stranded black lab, whose name she did not yet know.

"I also posted it on my Facebook, the Columbia Lost and Found page and Craigslist," Pratt said.

Christina Robinson, who works at home and is regularly on her computer, saw Pratt's post.

"It showed up in my news feed that there was a dog at The Crossing in the fence," Robinson said. "In the mean time, it started to rain and lightning and thunder."

Robinson decided she had to do something. She commented on Pratt's post, "Do I need to go get him?" The following conversation then took place (as written) on the KOMU 8 News Facebook page:

Robinson: I can take him in for the night??

Pratt: if you want i couldn't take him home with me I know there is a note for the Church tomorrow.

Robinson: I am on my way. no doggie let out in the storm!

Pratt: Are you going to take him to the Human Society tomorrow?

Robinson: Ill take him to my vet and see I'd chipped first. Check Craigslist. Walk the area. I work from home.

Pratt: Yeah i posted it on buyselltrade and send the info to komu hopefully the word will get out and someone can find there doggy

Robinson: We have him. We will get him taken care of.

While this was happening, Pratt went to Craigslist and posted a "Found Dog" in the lost and found section.

DiBlasi went to the same section and was about to post.

"I saw the first ad there was ‘found black lab'" she said. DiBlasi realized it was probably her dog. She emailed Pratt who put her in contact with Robison.

When DiBlasi and Robinson spoke, it was clear they were talking about the same dog.

"As soon as I said Lucy, her ears perked up," Robinson said. She then took the dog back to it's original home.

DiBlasi said it had been scary not knowing whether Lucy would be safe. "I was really glad someone found her and got her off the road and took her somewhere she wouldn't be afraid of the storm."

Pratt said she would have been devastated if her own dog was lost. "Seeing the dog behind the fence made me feel like, ‘oh my goodness, I need to do something to help this dog.'"

(This story is part of the KOMU 8 News series "Rescued Dogs: Beyond the Cage." Related articles include a gallery of photos sent by viewers who have made adopted dogs part of their families, and a report on why some dogs are harder to adopt out because of their age or color.)