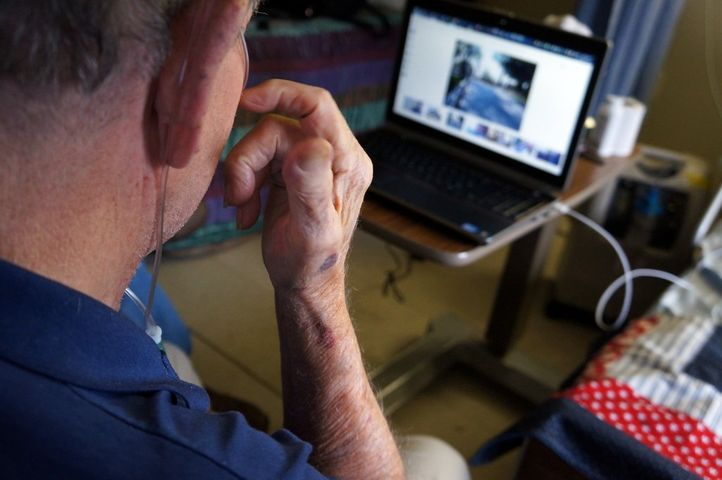 CAMERON - The St. James and Cameron Veterans homes are the latest Missouri living centers to experience "Virtual" Honor Flights. These online "Hero Tours" are for veterans not able to physically travel to see their memorials. Using Google Glass technology combined with Google Hangouts, veterans are virtually transported to places they thought they'd never get to see.

"Anyone can put a video in a VCR but this is interactive," said Yolanda Mitchum, Activity Director at the Villa Siena Independent Living Center. "They get to actually see the person walk up to the memorial. See all the writing. See the carvings. See all the detail stuff that you really can't see too well in any type of a tour video. "

"It's unbelievable. I can't even hardly explain it," World War II Veteran Ervin Linville beamed after he experienced the online tour to the USS Arizona from the chapel at the Missouri Veterans home in Cameron.

Veterans at the Veterans Home in St. James also hopped on a December 7th virtual "Honor Flight" called a "Hero Tour". They watched a live feed of the Pearl Harbor Anniversary ceremony from their cafeteria. At one point, sailors aboard the USS Halsey in Hawaii saluted the veterans in the Hangout. Since January 2013, more than 500 veterans around the nation have experienced Hero Tours.

Hero Tours are powered by tech savvy volunteers. They help the veterans homes join this group video chatroom and then videographers around the globe provide views of everything from Pearl Harbor to the beaches of Normandy, France. The tours are free. If you know of a veteran who is NOT able to physically travel, complete a Hero Tour Application.  If the veteran IS able to travel, you'll find applications at Central Missouri Honor Flight. According to the Veterans Administration, we are losing our World War II veterans at a rate of 600 a day nationwide.