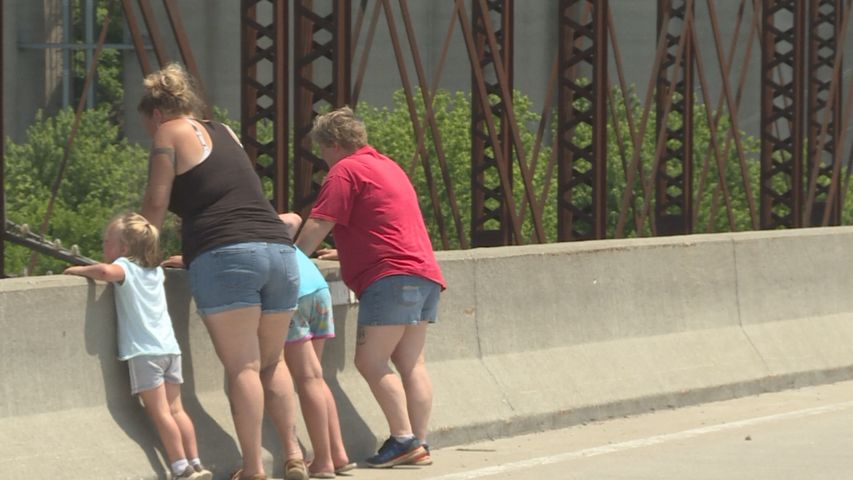 The Highway 240 bridge over the Missouri River was closed to vehicles several days ago due to the ongoing flooding. But it stayed open to pedestrians.

"My son is having his senior pictures taken because it's a historic moment and I think it would be cool for him to have," Wendy Duran said.

Duran and her son were two of many families Saturday seizing the opportunity to hike across a bridge not normally open to pedestrians. For Duran, the experience brought back old memories.

While the bridge is open to pedestrians, the River remains off limits. But Duran's son, Derrick, said some of his friends didn't listen to the warnings.

"I've had some friends of mine out on boats fishing and stuff. It's pretty dangerous to be doing that," Derrick Duran said.

Public safety officials say they can't emphasize enough how dangerous it is to venture out on the water. Glasgow firefighter Blake Neville said he has one message to anyone considering going out on the river.

"Don't," Neville said. "It's risky. You don't know it's a foot deep or two inches deep. Three inches is enough to take you off the road."

Glasgow resident Charlene Imgarten was looking at the river with her granddaughter, Kayla Logan, who drove in from Columbia. She said her drive was impacted since multiple roads are closed.

Imgarten emphasized her worry for anyone thinking about going out on the River.

"Never go out on this Missouri River now because it's very, very dangerous," Imgarten said.

Officials said the river is still expected to rise slightly with rain in the forecast in the coming days.