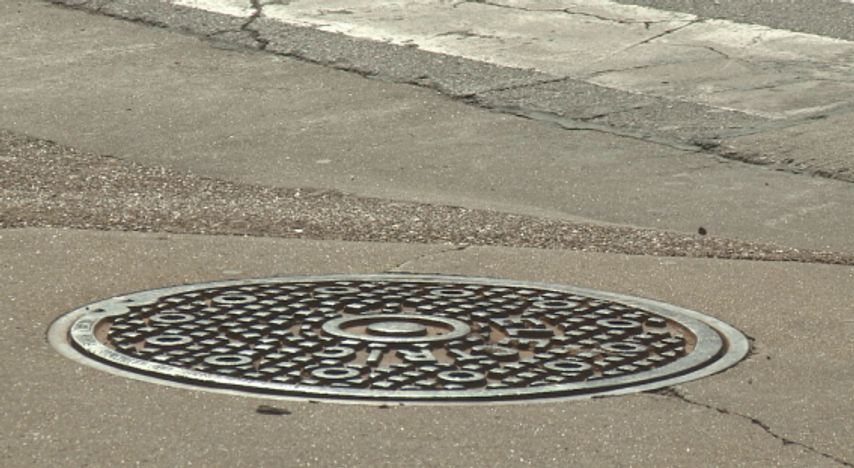 COLUMBIA - Columbia resident Antonia Reek was walking at night with friends in June of 2016, when the ground beneath her feet, disappeared.

"I kind of turned around to talk to one of my friends, and like I just stepped in, stepped into the hole that was just open. The lid was just nowhere around it." Reek said.

Reek said she fell into an open manhole.

"After my friend pulled me out of it, we ended up finding the actual lid like 30 feet away in the grass."

She said the fall left her with a fractured ankle and an eight-inch scrape up her leg. She said the recovery is still on-going.

"I have to go to the doctor again, I wore a boot for about a month," Reek said. "My ankle never really healed back to the way it was before."

Another Columbia resident, Ryan Alsip, fell into a water meter hole with a loose cover in his neighborhood.

"I was walking downtown to go to dinner with a few of my friends and we walked down to the, we were walking down the street, and I stepped in the sewer hole, thinking it was screwed in, but I guess it wasn't," Alsip said.

He said he was luckily able to catch himself on his other leg, but his leg busted a water pipe in the hole.

"We did make reports, but the water was still flooding for the next couple days," Alsip said. "And so, I had a nice little bruise on my leg for a couple days then."

The Columbia utility community relations specialist said there are various reasons why the covers could be missing or loose.

"Some of them are stolen, some of them could be knocked off in heavy water, flooding," Patricia Weisenfelder said. "It could be hit by maybe a tractor with a mower behind it, and just kind of bumped out of place."

She said the manhole covers weight 150 pounds each, to deter people from being able to remove or steal them.

KOMU 8 requested records of every time someone made a complaint about a "manhole or man hole" to the city in the past three years.

The records show people reported open manholes 36 times, and loose or partially uncovered manholes or sewer holes 21 times. A couple of people called to say their son or daughter fell into an open manhole.

One complaint from March 2017 said "The customer also reported the man hole cover is missing and his daughter fell in."

Another, from July of 2015, said there was an open manhole on Richmond Avenue, and "her son fell into the manhole and needed staples in his leg."

In September 2017, a "Customer stated that her daughter fell into an uncovered manhole near the Lewis and Clark Hall where road work is being done on Tuner and Fifth Avenue."

The customer said her daughter "skinned her shin down to the bone."

Weisenfelder said the city relies on people reporting open holes, otherwise there is no way for crews to come fix the situation.

City crews are dispatched 24/7, and they have replacement manhole lids on hand, or they will mark the hole.

She said there is no way to bolt or secure the manhole covers down to prevent theft, because that would be up to the manufacturer.

Columbia Public Works' Public Information Officer Barry Dalton said the manholes need to be accessible for maintenance on a moments notice, so bolting them down would not work. He said most of the time, the covers are moved by rainfall, mowers, or trucks, even when the manhole is located on a sidewalk.

"It's almost never human error, it's almost always something in the environment," Dalton said.

Alsip said the water meter hole he fell into seemed to be unscrewed or left un-bolted, which also allowed the water to gush out of the hole for a few days after his accident. He said someone did securely replace the cover over the hole.

"I know me and my group of friends put it back on there, and tried to get it on there, but I don't know for sure when it was re-bolted on actually."

Alsip said the city needs to make sure the manholes are screwed on tight.

"I would also like to tell everyone that when you are walking to the restaurants and bars, make sure you are looking down where you're walking and you don't step through these," he said. "Because they are dangerous and you can hurt yourself."

Reek said the experience was surprising and painful, and her injuries put a damper on the rest of the summer.

"It's crazy, you just don't expect to be walking down the street and just fall in a hole that's like on the sidewalk," she said. "Please cover the manholes, that's all I have to say."