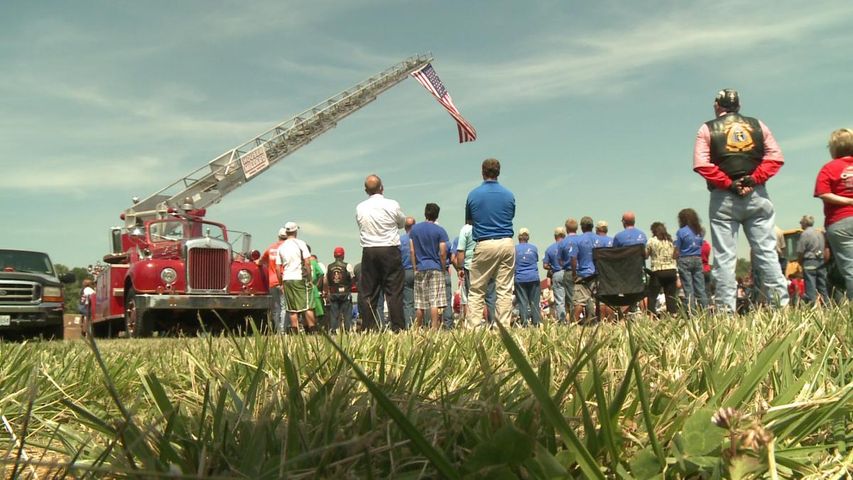 JEFFERSON CITY - The building of a $400,000 "smart home" for a wounded mid-Missouri marine officially began Friday with a groundbreaking ceremony, drawing hundreds of locals and even an elementary school to commemorate CPL Tyler Huffman and "Operation Tyler."

Huffman, a 24-year-old soldier paralyzed in Afghanistan in 2010 after a sniper shot him, said he hopes to move into the home in Jefferson City by November with his wife and son. According to Chris Kuban of the "Stephen Siller Tunnel to Towers" Foundation, the home will provide Huffman with handicap-accessible amenities like special doors and appliances.

With a class from West Elementary in Jefferson City and hundreds of other supporters looking on during the "Operation Tyler" event, Huffman and his family dug a shovel into the plot of land to break ground. Private donations will finance the home for Huffman, partly through a concert July 27 at Apple Creek Farms. Kuban said the home will likely be around 2,700 square feet.

This particular smart home is part of a nationwide effort to provide wounded soldiers with homes. The Stephen Siller Tunnel to Towers Foundation and the Gary Sinise Foundation partnered to build three homes last year, and they are currently fundraising for homes in various states including New York, Virginia, Ohio and Georgia.

"You have to start all over again, start from ground zero and try and find a home. Try and find a job. Compared to the guy who comes home and he's perfectly fine," Huffman said. "For guys that are wounded like me, it's lot harder to get things done than it is for the average person."