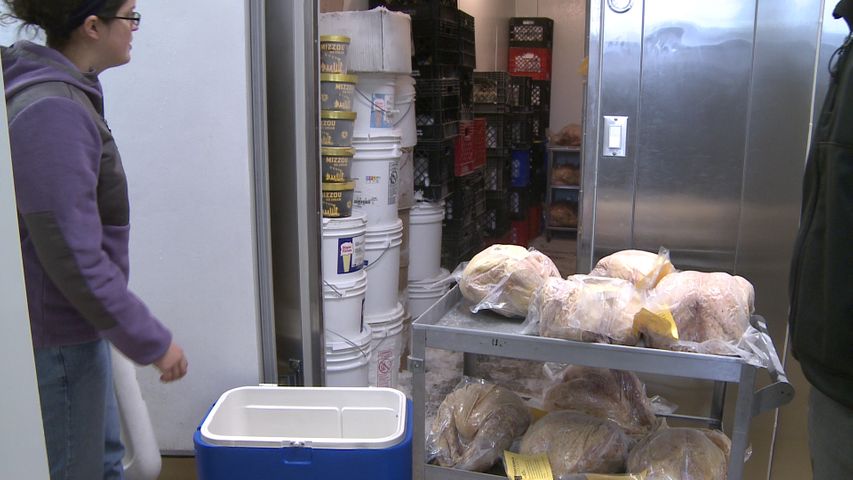 COLUMBIA - Food science students at the University of Missouri distributed turkeys while collecting donations for the Food Bank for Central and Northeast Missouri on Wednesday.

Turkeys cost $30, but the Food Science Association offered a discount to donors who gave healthy canned goods to the cause. However, many customers did not know about the donation discount.

"I had no idea they were trying to collect cans," said Ashley Apple. Apple is an MU student who is planning a Thanksgiving dinner with her roommates this week. "If I had known, I would have brought in cans," she added.

The organization received less than 20 cans in its first collection. Members are hopeful donations will increase.

Each donated can would take 25 cents off of the total price of the turkey. Donors could donate up to 20 cans, saving them a maximum of $5. The lack of donations comes at a time when more than 35,000 Boone County residents and 100,000 Missourians utilize the food bank.

"For this time of year, fresh fruits, vegetables and beans are a valuable and inexpensive donation," said Food Bank Executive Director Peggy Kirkpatrick who encouraged the Food Science Association's health-conscious effort. She also reminded the public that any donation of any type of food is welcome.

The Food Science Association smoked 100 turkeys, up 25 turkeys from last year. The group already sold 96 turkeys. The organizations stored the turkeys in the freezers of Buck's Ice Cream.

The discount comes as a part of the Collaborate for a Healthy Future project. The project is a yearlong effort to promote healthy donations to the food bank. This is the first year the Food Science Association has accepted can donations. The organization has been selling turkeys for more than five years.

"We want to raise awareness for the Food Bank for Central and Northeast Missouri," said Gelsey Minnick. Minnick is the Vice-President of the Food Science Association.

"We want people to think if they would refuse to eat the food, then they shouldn't donate it. Healthy foods are a necessity," Minnick said.

Each ready-to-eat smoked turkey weighed from 10 to 12 pounds, and came frozen or pre-thawed at the customer's request. The Food Science Association brined each turkey, which adds more flavor than a store-bought turkey. The turkey requires 30 minutes of reheating, and then it's ready to eat.

It cost the Food Science Association $1500 to purchase 100 turkeys. The group plans to generate $1000 profit from the sale. The money will be put toward industry-related trips that will allow food science students to tour food plants and network with potential employers. Past trips include visits to Frito Lay, Sensory Effects and Dairy House.

If interested in ordering those last four turkeys and/or donating food to the Food Bank for Central and Northeast Missouri, click here.