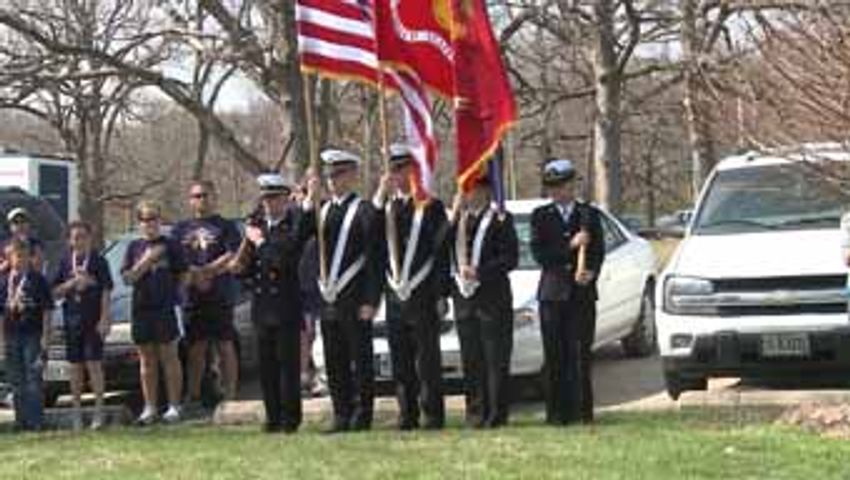 "He used to run around with me on his shoulders when the Chiefs used to win," Gelina said. "And started banging on the doors in the house. Yelling and screaming... I'll never forget him."

Mark Gelina died in Iraq in 2006 at the age of 33, leaving behind his wife, Stacey, three children and a stepson.

More than four years later, his family now has a monument in its hometown to honor his legacy every day.

The organization Flags for Freedom Outreach unveiled the statue at Rothwell Park in Moberly, Mo., Saturday morning in front of family, friends and community members. The group, founded four years ago by Candy Adams, spent the past year raising funds for the monument.

Adams does not plan to stop at just one headstone. In fact, she said she would eventually like to create a monument for every solider killed in Iraq and Afghanistan.

"It's a goal that we know is kind of out there," Adams said. "But we're very serious about what we're doing and we're very driven. And every single [soldier] deserves to have a ceremony like we did today."

The short ceremony featured mayor Bob Riley, family members-- including Nick, who told the story about the Chiefs-- and friends as speakers. Maj. Sean Quinlan, who served alongside him in the Marines, gave an especially inspired speech.

"Everything Mark Gelina did was for the Marines," Quinlan told the crowd. "I was with Mark the day he checked in until the day he died. I was with him when he died. It'll never be the same again."

Adams said the event "couldn't have gone any better." According to her, the organization's long-term goal would require $16 million. To raise the money, Adams wants to create a "dollar program" with national corporations during the month of September. The plan would allow customers to purchase personalized dollar bills and hang them on store walls for the entire month.

For Gelina's loved ones, such as his mother Teresa Coonce, organizations like Flags for Freedom Outreach prove therapeutic.

"It's awesome to think there are enough people in the world and donations to make the monument for us for the city of Moberly," Coonce said. "I wish [these ceremonies] didn't have to happen. But it's a wonderful way to honor our sons as well as anybody's loved ones."

Coonce said she never worried about Mark overseas because her father and brother both returned from war unscathed. Four years after his death, she still stares at a picture of her son each morning and night, which she received as a Christmas gift from her three oldest children.

"We see him every day," Coonce said. "If he's not in our thoughts, he's in our visions."